‘We are all beauty queens!’: Dine’ woman runs for Mrs. World competition, encourages others to sign up for pageants

By Colleen Keane
Special to the Times

Maureen Mink, Dine’/Irish/English, has seven months to get ready for the Mrs. World competition. 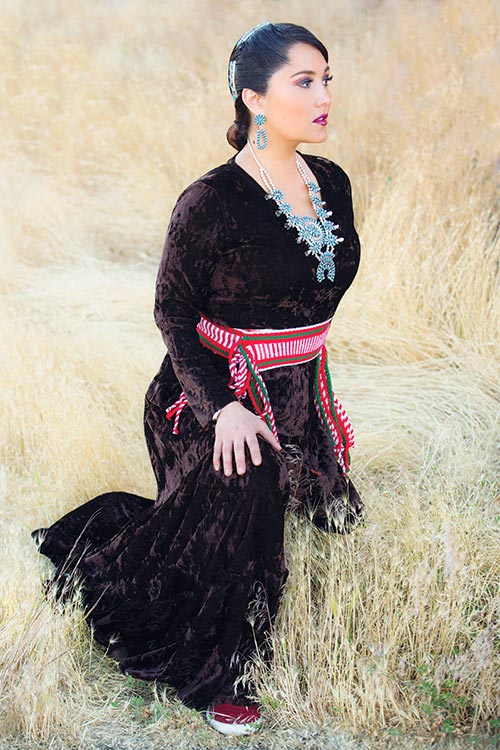 Courtesy photo | Maureen Mink
Maureen Mink will represent the Navajo Nation as a competitor in the 2023 Mrs. World competition to be held in January.

The Mrs. World competition is the largest beauty pageant for married women and features entries from dozens of nations around the world.

While the contest months away, Mink has been preparing for the international title for a very long time. She’s been competing in pageants and training and mentoring other women for the past 20 years.

She said she’s had many rejections along the way and some significant wins. Most recently, she said she was given the title of Mrs. Navajo Nation World by the Mrs. World Pageant.

The 48-year-old beauty queen is married to Heriberto Rivera from Puerto Rico.

“He has been monumental in helping me accomplish my goals,” Mink said.

The couple live in Florida and have an extended family of five children and two grandchildren, many relatives on the Navajo Nation, and Rivera’s family.

Her father is Darel Nakai who worked in economic development in Window Rock when she was growing up.

“I would fly with him to different places, like Monument Valley,” Mink recalled. “I went to all these meetings with him. He was very involved with the Navajo Nation, and I was right there with him.”

Her mother is Valerie Nakai. Mink said she goes back home to the Navajo Nation to visit as much as possible.

“I had no idea how intense (pageantry) is,” Rivera pointed out. “I thought it was pretty girls. Not at all – these are athletes, intellectuals, humanitarians.”

“I’m in awe of the preparation needed for these events,” he said. “This is a family affair. It does not happen without family. Everybody is involved.”

At home, Rivera said he had a runway set up so Mink could practice whenever she wanted to.

“With practice everything becomes a little bit easier,” Mink tells the women she mentors. “You are able with time to get better and not be so harsh on yourself. Just keep trying even if you feel you are out of your element.”

If she wins the Mrs. World title in January, according to the list of winners on Wikipedia dating back to 1984, she will be the first Native American woman to represent her tribal Nation.

Mrs. World can use her reign to bring attention to issues she wants to address and help resolve. Some of her top issues are a better understanding of tribal culture and lifeways. Also pageant diversification.

“She’s done a lot to reach out to women and children and she is committed to training and mentoring other indigenous women to diversify pageants,” said her sister, Madeline Smith, of Centerville, Utah.

“There’s some diversity, but not much,” Smith noted.

Over the years, Mink has coached 30 pageant winners. Four Native women have followed in her footsteps.

Mink helps with public speaking, walking, posture and any questions contestants may have.

“She is the first one I always go to get solid advice,” said Jeanette Lee, Choctaw/Swedish.

“As a trainer, she keeps contestants informed of important information like qualification of funds and contest deadlines,” said Lee. “She reaches out to people to say, ‘Do you need this, this and this?’

“Because a lot of it is, you just don’t know what to do,” she said. “It could be like a foreign language to people who haven’t done it before.”

To educate non-Natives, Mink draws on her Diné culture.

“Part of being Navajo is walking with beauty,” she said. “I think we can (also) educate with beauty, tell our story with beauty.

To further the understanding, Mink recently wrote two children’s books, “Navajo Boy” and “Navajo Girl,” which extend a message of mutual respect and appreciation for all forms of life, according to an excerpt about the books, which are available on Amazon.

Mink is also approaching school districts to include the books in academic offerings.

She gives encouraging words for women to give pageantry a try,

“I would tell women everywhere to make the move to showcase their beauty,” she said.

And she has a special message for Diné women.

“As Diné women,” she said, “we truly walk with beauty and having that inside of us, we are beautiful as we are.

“I really believe any woman can celebrate beauty at any age,” she said. “We are all beauty queens!”

To cheer on Mink and the contestants, the Mrs. World competition will be held in January, 2023, in Las Vegas, Nevada. A specific date has not yet been publicized.

The post ‘We are all beauty queens!’: Dine’ woman runs for Mrs. World competition, encourages others to sign up for pageants appeared first on Navajo Times.

See the Oldest View of Our Known Universe, Just Revealed by the James Webb Space…