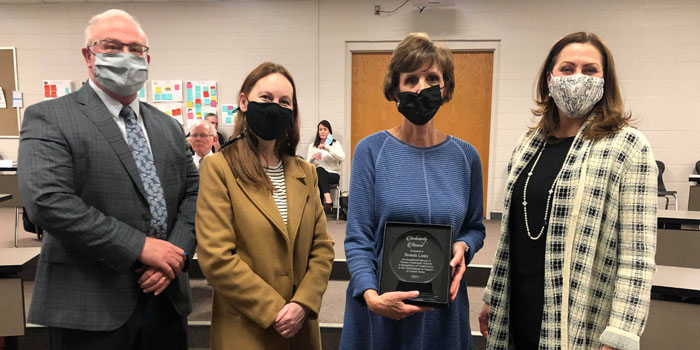 WARSAW — A Warsaw Community Schools staff member was recognized for inclusivity during a Board of Trustees meeting on Monday, March 15.

“The first year it existed, we were Unified Track champions,” said Warsaw Community High School Principal Troy Akers. “That was pretty incredible. As far as inclusivity, I couldn’t think of a better person to be awarded this.”

The award was presented to Linky by Akers; Dr. Dani Barkey, WCS assistant superintendent of secondary education; and Amanda Scroggs, WCS communications director. Barkey and Scroggs are leaders of the inclusivity pillar that is part of WCS’s five-year, four-pillar strategic plan.

“One of the things that we wanted to do with our pillar is really recognize those people who have really worked hard in inclusivity even before the strategic plan developed,” said Barkey.

The text on the award states Linkey has provided “exceptional service to Warsaw Community Schools, in recognition of contributions to the establishment and support of unified teams.”

“I’ve always felt like this is a welcome sport and well-received by the community,” said Linkey. “I really appreciate that it’s truly incorporated. What I like best about it is it is a truthful linking of students with disabilities and students without.”

In other business, the board heard from Student Body President Hannah Hutton about a prom update. WCHS prom will take place from 8-11 p.m. May 15 at the Kosciusko County Fairgrounds.

Hutton also said senior graduation will take place outdoors on June 4; the class of 2021’s flower is sunflower and class colors are white and gold.

During the meeting, a second preliminary determination hearing was held regarding the issuance of bonds to help the school maintain its tax rate while completing planned renovations at Warsaw Community High School and Warsaw Area Career Center. The school board held its first public hearing during a work session on March 9.

These renovation projects will have no effect on the district’s tax rate, with funds only being used for construction needs.

Priorities in a facility study for WCHS and WACC include safety and security, academic classrooms, internal flow and student learning spaces. About 30 classrooms at the high school were renovated in 2020. Classroom renovations included carpet, paint, lighting, ceiling, HVAC and electrical outlet updates. Thirteen WCHS classrooms are set for renovations this summer.

Two major concerns at WCHS included in the renovations are fixing overcrowded stairwells and establishing a main entryway.

In a previous school board meeting, Baker Tilly Partner Todd Samuelson estimated the projects’ amount at $30 million, which would be repaid in about 16 years. WCS Superintendent Dr. David Hoffert said that based on the school corporation’s size, WCS should always be involved in some type of upgrade, renovation or maintenance project on a year-by-year basis. The board approved three resolutions regarding WCS’s project plans.