This Is The Education Future Republicans Want. 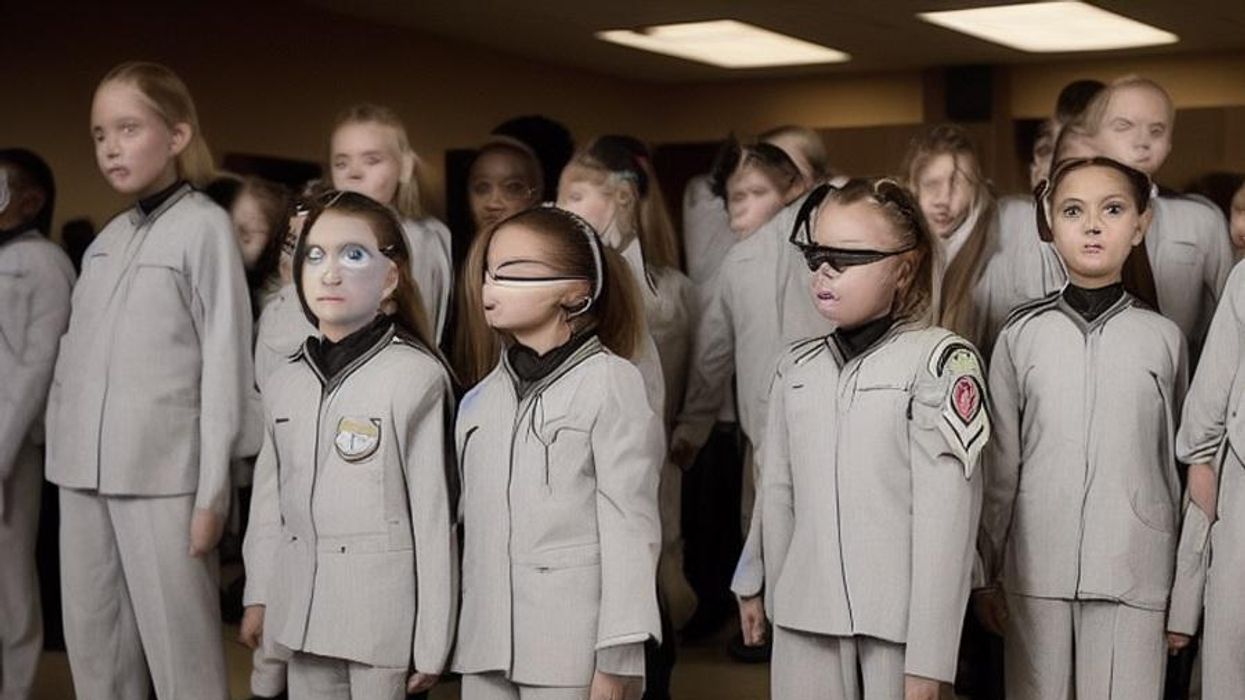 Middle and high school kids who are fans of dystopian fiction have an exciting, if grimdark, future to look forward to, if educational trends in red states continue. It may lack for annual blood combat or robot teachers, but it should be chock full of religious indoctrination and harsh discipline, which after all was how Grampa was brought up when America was great and it never did him any harm. And there won’t be any dirty sex books or “critical race theory” to rot their minds, either, so they’ll grow up patriotic lovers of liberty and guns, which will presumably continue to remain plentiful, too.

And assuming that Republicans get the political improvements they want, there shouldn’t be too much worry about a bunch of troublemaking “voters” changing any of that, since voting will be tightly controlled as well. Wouldn’t want the republic to be subject to the whims of the majority, after all.

I’ve been following the rightwing war on public schools since I was getting my own bachelor’s degree in English Ed during the Reagan years, back when I still had a hairline and the chosen enemy of Good Christian Patriots was “secular humanism,” and while they still represent only a small segment of the overall population, they seem closer than ever to their goal of eliminating “government schools,” or at least diverting enough taxpayer money away from public schools that they can sustain an alternate reality education system that’s more to their liking — on the public dime.

See, for instance, this piece at Salon yesterday, in which Amanda Marcotte argues that in some states, the future of education could look a lot like what’s already happening in New York’s Hasidic private schools, where a yearlong New York Times investigation found religious study for boys is emphasized almost to the complete exclusion of secular learning, and where plenty of boys finish high school unable to speak or write English. Worse, much of the funding for these yeshivas comes from public money — but not through the direct “school choice” vouchers that school privatization fans call for. Instead, the yeshivas apply for every bit of public education funding that can also be used at private institutions, like funding for daycare vouchers and antipoverty programs like school meal support. The yeshivas still charge tuition, but it’s significantly offset by government funding, with virtually no oversight because the Hassidim have also made themselves a powerful voting bloc in city and state politics. It’s an important but pretty depressing read.

As Marcotte points out, it’s also important well beyond New York, because while the particulars may differ, the central problem, public funding of private religious schools, is precisely what Republicans would like to see in the rest of the country, and they’re getting what they want in the name of “parental rights” and “school choice.” Says Marcotte,

The same political pressures and flaws in the educational system that allowed this problem to fester in New York are being exploited across the country by conservative activists, nearly all of whom are Christian rather than Jewish. Worse yet, these Christian activists aren’t just interested in keeping their own kids away from secular education. They have grander ambitions, and would like to gut the education system as we know it, to make sure that no one’s kids can enjoy the right to a free, robust public education.

That’s been clear since last year’s panic over “critical race theory,” which no public schools are actually teaching, but which became the impetus for a bunch of copycat laws across the nation to make sure that history isn’t too accurate and that any discussion of slavery and Jim Crow be framed as “regrettable departures” from the true ideology of equality the Founders believed in (which they accidentally forgot to write into the Constitution because everyone has a bad day now and then). The national (and nationalist) freakout over CRT was very effectively promoted by the rightwing Manhattan Institute’s Christopher Rufo, who makes no secret of his belief that bringing down public education is essential to undoing the administrative state. After all, if schools, healthcare, and government at every level are infected with “woke ideology,” the only solution is to tear it all down and get back to basics.

For an example of where this could lead, look at Arizona, where this summer Republican Gov. Doug Ducey signed into law a universal school voucher program, meaning that any parent can take the roughly $7,000 a year that would go to their kid’s public school costs, and use it for tuition at a private school, online school, or even to pay themselves to homeschool their kids.

Best of all, because Arizona is all about Freedom, the state won’t track where the voucher money goes, because that would be tyranny or something, so there’s no financial accountability as well as no need to show that kids are learning anything. Ducey said that the vouchers were needed to help poor kids who are “trapped in failing public schools,” but as it turns out, 78 percent of families applying for the funding, as of the end of August, didn’t have kids in the public schools — they were already sending their kids to private schools or homeschooling, and now they have a nice payoff, or a tuition subsidy for expensive elite academies that already charge through the nose.

Happily, it’s possible that the vouchers may be nipped in the bud by a voter initiative; if enough petitions can be gathered before the law goes into effect on September 24, the payouts will be frozen and the law will be put on hold until after the initiative gets a vote in the 2024 general election. In 2018, Arizona voters overwhelmingly defeated a ballot initiative that would have greatly expanded the use of vouchers; the bill passed over the summer made the vouchers available to all parents in the state.

In its bid to become the Bad Educational Ideas Laboratory of the Nation, Arizona took another extreme step shortly after the vouchers law passed, this time allowing people who haven’t finished a bachelor’s degree to become teachers, although it may not be quite as insane as Florida’s law allowing military vets with only some college (and a C average) to become teachers. Under the new law, people who are still working on a bachelor’s degree can start teaching in classrooms while they finish up teacher training and their degree. They would have to be supervised by a full time teacher, and wouldn’t be granted certification until completing teacher education and the bachelor’s degree, all while holding down the full-time teaching job. That way they can get a head start on burning out!

Jacqueline Rodriguez, VP of research, policy, and advocacy at the American Association of Colleges for Teacher Education, called the law “unfathomable,” and worried other states with teacher shortages — all of them, Katie — might pass similar laws.

It’s not only degrading the profession and the value of what it means to be a profession-ready educator — this is a double-edged sword.

We have now allowed K-12 students to be placed in harm’s way with an unprepared person at the helm of the classroom by putting them in a position where they’re not only set up for failure, but it is very unlikely that they are retained in that same position, because they were not set up with the skills, knowledge, and dispositions to be successful.

Well, sure, but it’s a warm body at the front of the classroom, and maybe if they survive the gauntlet of being thrown into teaching before they’ve completed their own education, they’ll emerge stronger teachers.

Besides, as the folks who want to tear down public education say, anybody can teach without all that Marxist indoctrination in education colleges anyway. All you need is your Bible, your copy of the 1776 Commission Report, and your handgun in case of school shooters.

And heck, if those new teachers turn out not to be very good, you can just take the money and give it to your church school anyway.

Yr Wonkette is funded entirely by reader donations. If you can, please give $5 or $10 a month so we can keep you in stitches with our timely John Huey, John Louie, and John Dewey jokes.

Do your Amazon shopping through this link, because reasons.

The Global Search for Education: Marie Leiner Reflects on How Schools Can Tackle…

“No Tech for Apartheid”: Google Workers Push for Cancellation of Secretive $1.2B Project with Israel |…