Scenes from the first annual SHE Trucking Expo – big-tent appreciation, education in Chattanooga

Founded several years ago by Sharae Moore, then a driver somewhat new to her trucking career, the SHE Trucking Facebook group and mentoring/information-sharing organization has certainly made a name for itself among women behind the wheel – many owner-operators among them – among others. But Moore is certainly not one to rest on laurels.

Friday this past week, Moore and partners’ first in-person convention got off the ground in Chattanooga, drawing hundreds to that city’s convention center for a wide array of talks and workshops, an impressively diverse exhibit floor, plenty of fellowship and networking, and much more.

Officially, too, Friday was proclaimed SHE Trucking Day by the city’s mayor’s office, and Tennessee State Rep Yusuf Hakeem was on-hand early in the day with a commendation for Moore in the form of a proclamation signed by the speaker of the Tennessee House. 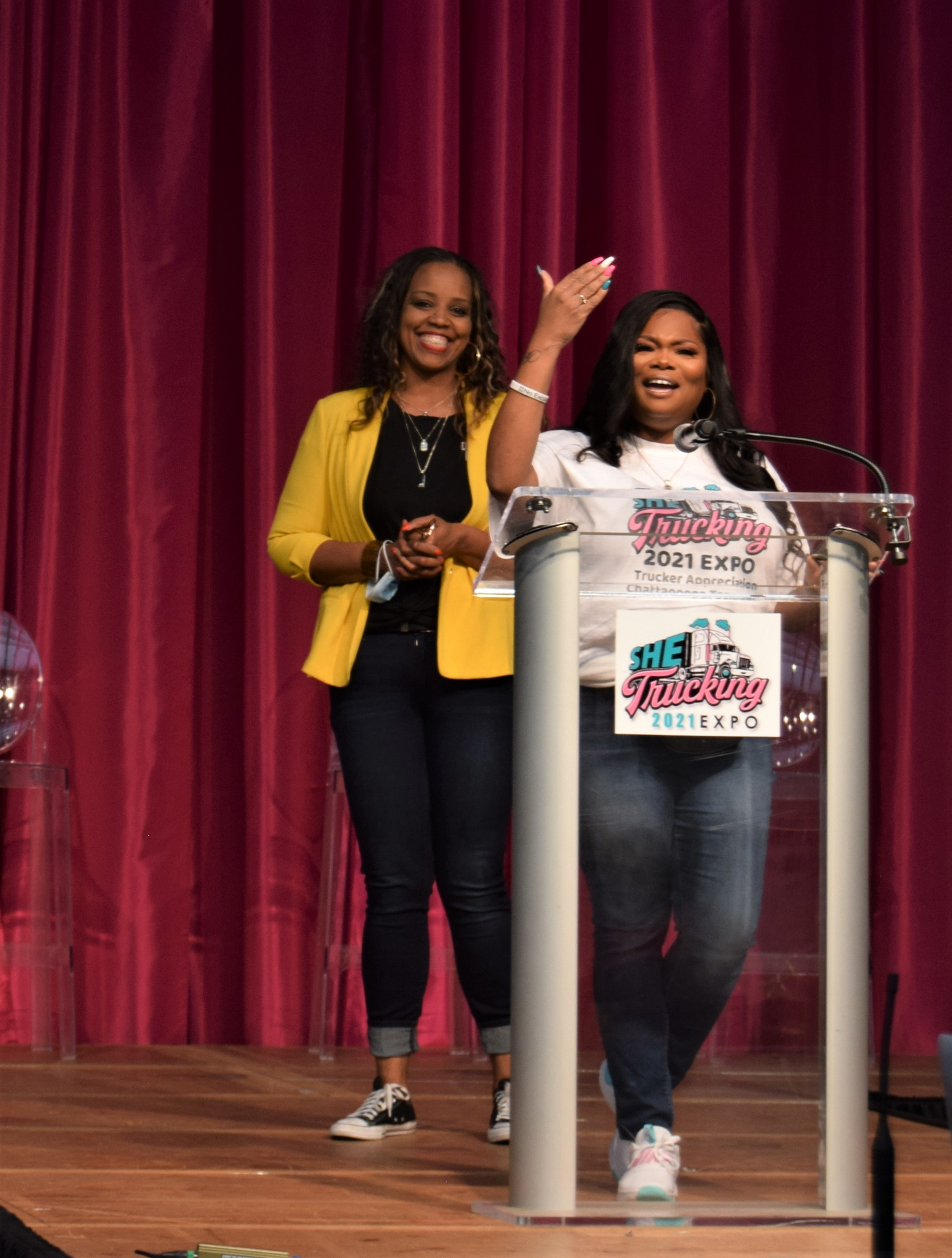 Opening the event from the stage, Moore thanked the team that assembled to make this show possible, including many individual drivers and members of other groups, from the Leading Ladies of Logistix to Real Women in Trucking, both represented at the event. Of the SHE Trucking team members, she said, “Y’all don’t know what I put these ladies through, but they come through to help everybody for the greater good. It takes a real team” to put something together like this. The event garnered a wide range of support from sponsors and exhibitors like U.S. Xpress division Variant and California-based Primelink Express, the Fleeting, Inc., digital freight marketplace, and many, many more.

Hakeem presented Moore and the event as an example of determination, of not giving in to voices of those who “will tell you what you can’t do and you won’t do. … Thank you for being yourself,” he told her from the event stage, “and being that example, that role model of what can be, if you’re willing to work for it.”

As at any truck show I go to, the full results you’ll see here over time, as an array of potential stories present themselves.

And that’s particularly the case with this one, as the program of speakers on Friday covered the gamut from personal safety on the road to high-tech freight procurement, strategies in building the small fleet back office and contract bidding with larger shippers. Stay tuned for more from many of these individual businesses. 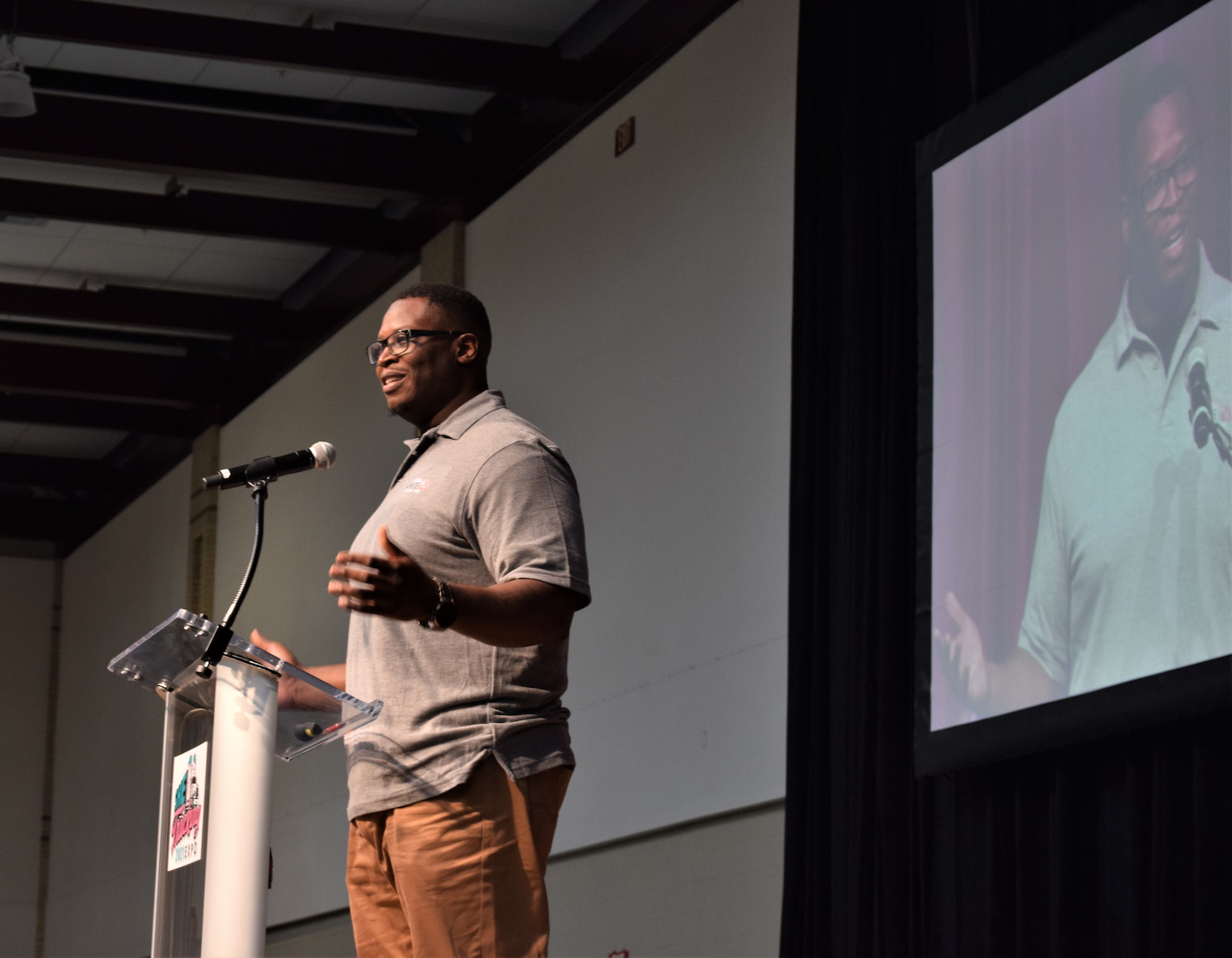 Among speakers was Unite Us Logistics CEO Thomas Johnson, a former NFL defensive lineman whose second career in trucking has him leading a 21-truck Memphis-based small fleet. He bids to large shippers, though, as a brokerage with a consortium of MBE (minority-owned business) certified carriers (from 1 truck up to dozens), to ever greater success, he said. 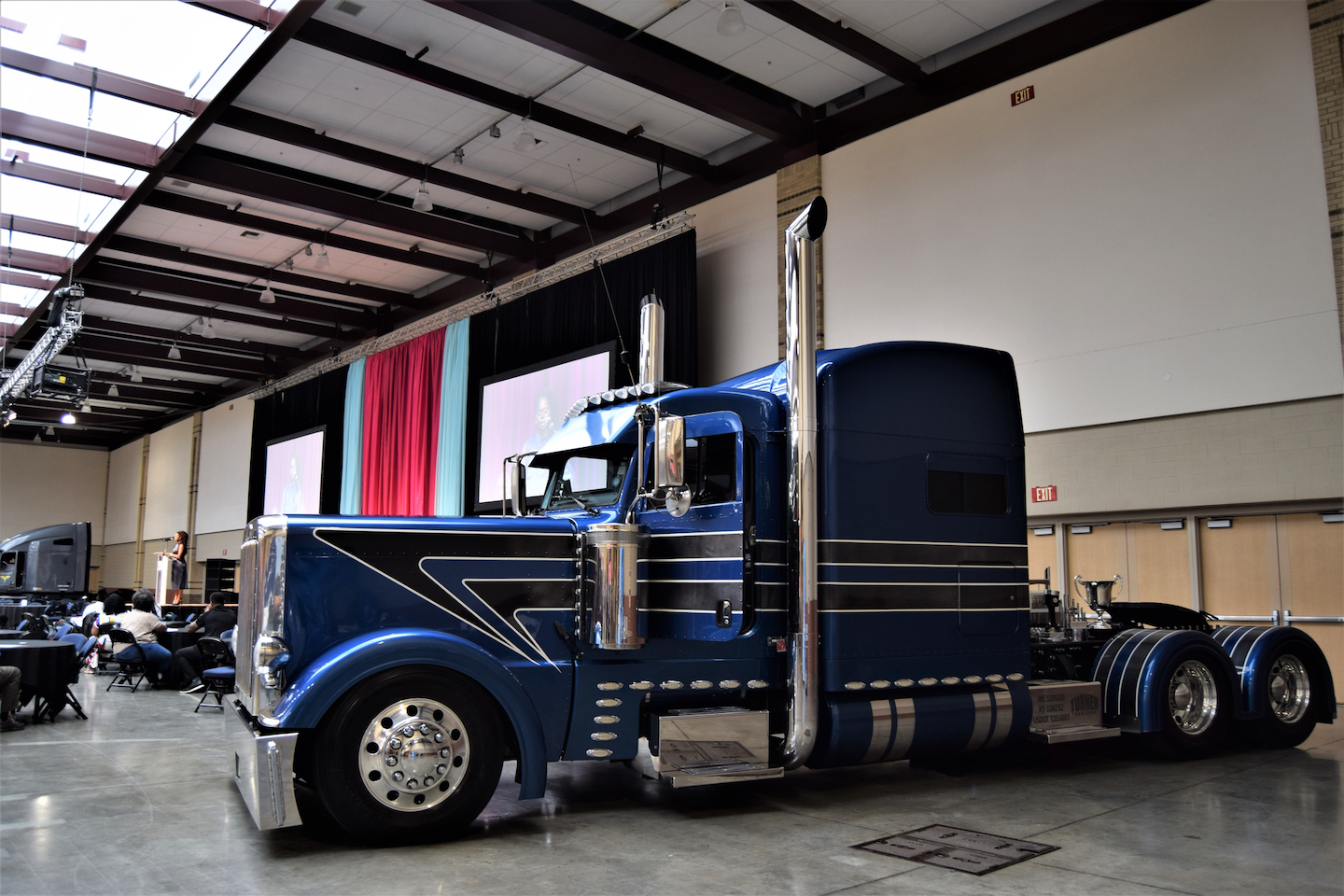 Also on hand on the show floor was the familiar striping pattern on this 2015 Peterbilt 389, Showtime, a past Pride & Polish-winning rig of Eric Turner’s Turner Transport car-hauling small fleet out of Ellenwood, Georgia. 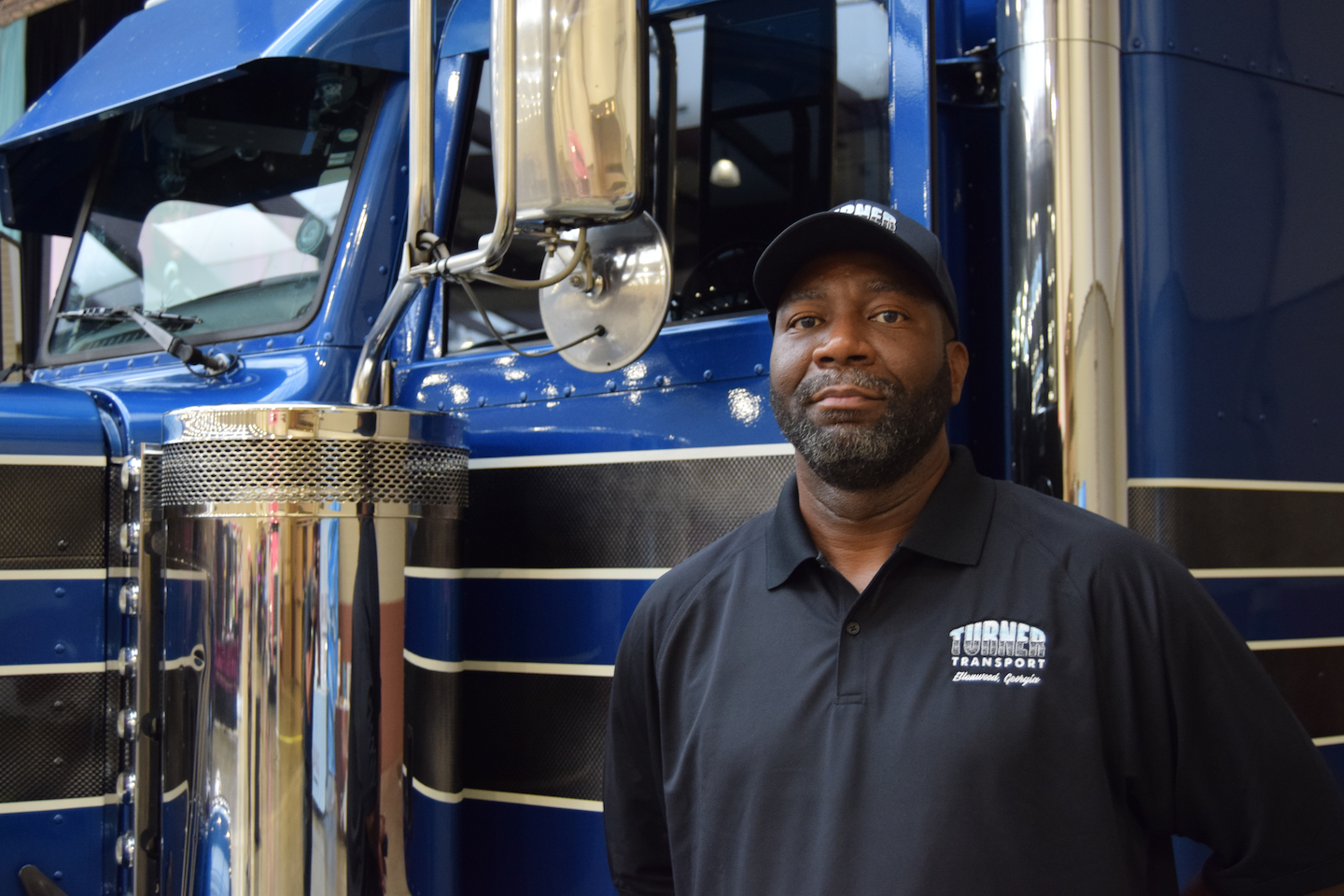 Eric Turner (pictured), since I’d last seen him, had moved into refrigerated freight, a fortuitous move, he said, given pressures in the automobile market where he’d specialized predominantly for many years moving between auto sales and manufacturing locations. Turner’s long been familiar with SHE Trucking organizer Moore – she drove for Turner Transport in the early days of her career, he said. Former police officer, current hauler and YouTuber Brittney Richardson gave an impassioned presentation on her story of being assaulted in the line of duty, and what anyone on the road can do to prepare themselves for self-defense when it becomes necessary, and how to avoid that necessity otherwise. 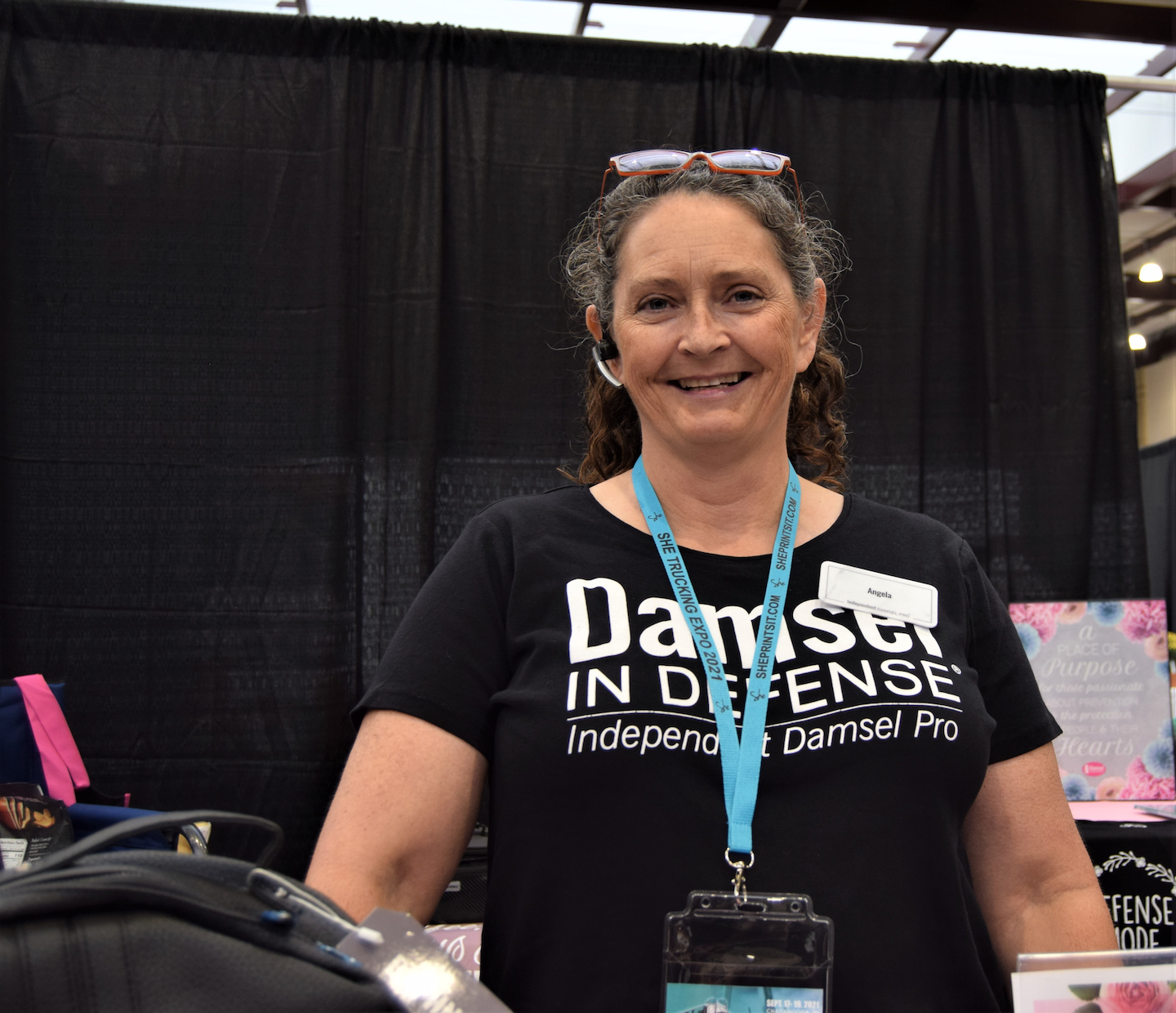 Among exhibitors was Angela Shufeldt, an independent reseller of Damsel in Defense products and an inland intermodal hauler for J.B. Hunt. As with Richardson, Shufeldt comes to the personal-safety/self-defense arena driven by personal experiences in past she wishes today she’d been better prepared for. 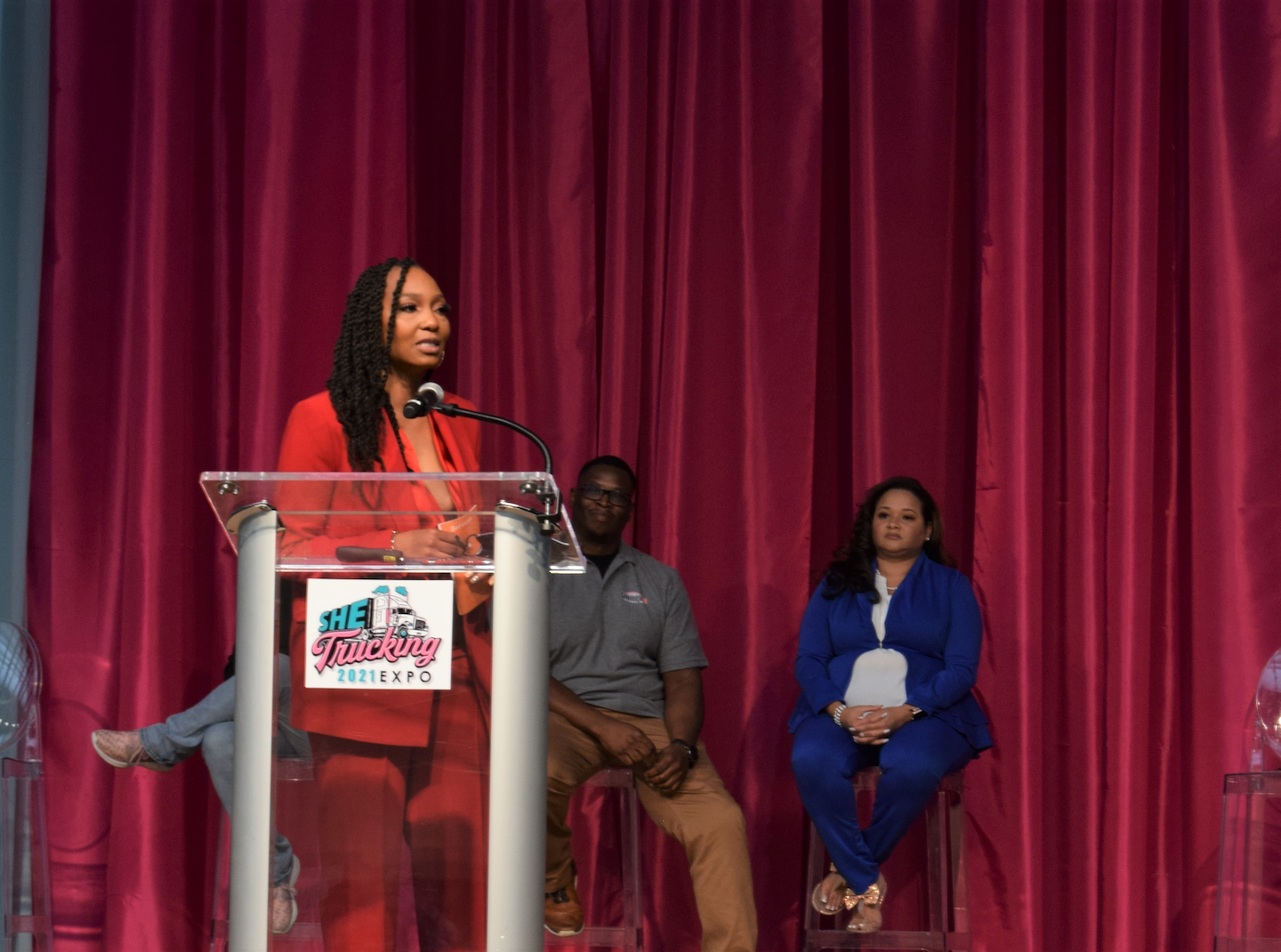 Precis Screening’s Michelle Foyer from the SHE Trucking stage told her own personal story – her teenage son was murdered in what she described as a “drug deal gone bad with his so-called ‘blood brothers’,” which in part brought her to where she is today, leading a drug screening company that offers a consortium for owner-ops and helps individuals and companies with the process of setting up their own testing equipment, regimes and procedures. 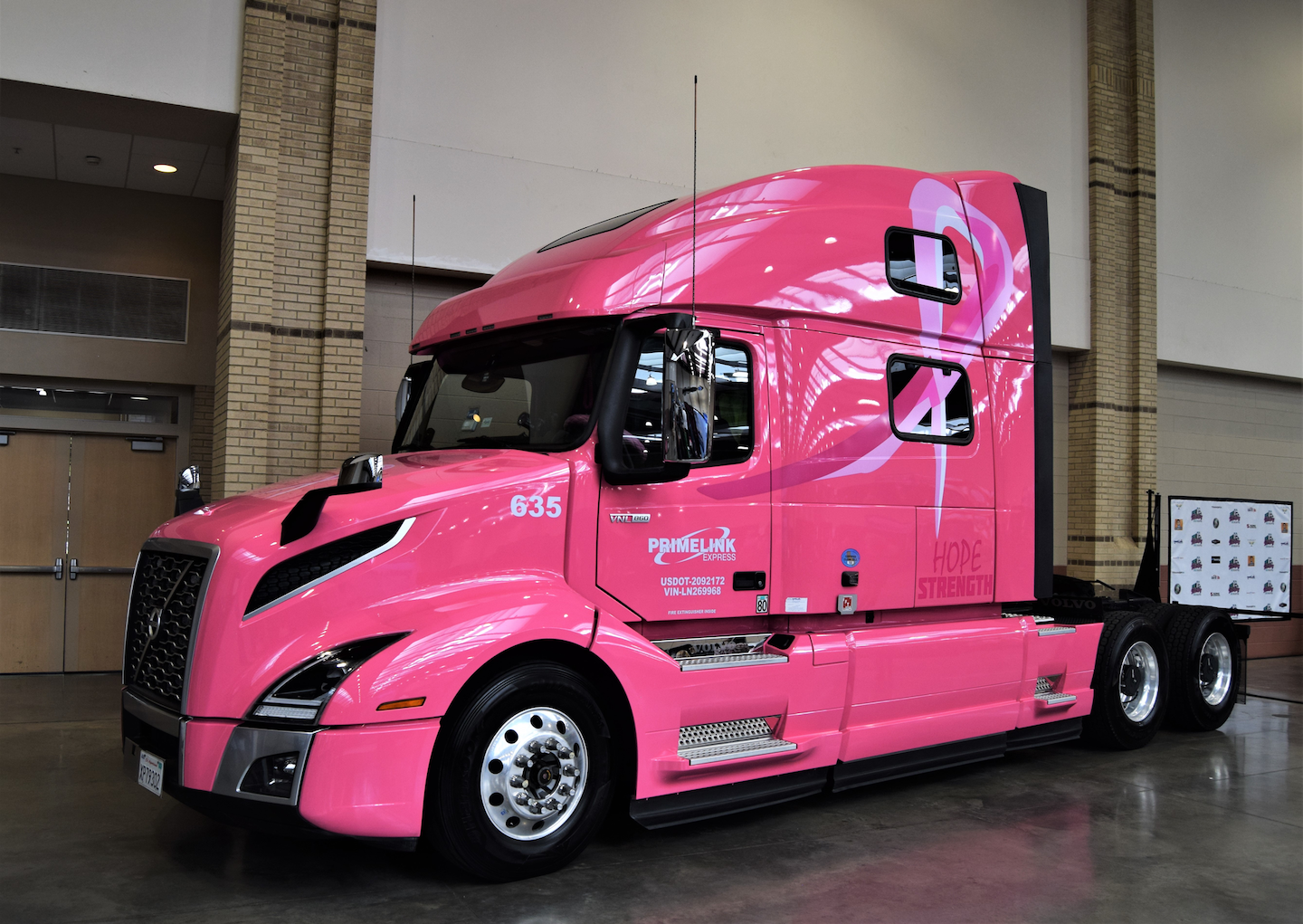 California-based Primelink Express’ CFO Sunny Vraitch spoke to the lineage of this breast-cancer-awareness Volvo on display just inside the entrance to the SHE Trucking Expo show floor. The company decked the Volvo out this way as a way of giving back to one of its professional drivers, whose mother had been diagnosed with breast cancer and was undergoing chemo. The company worked with the Susan G. Komen foundation to structure a long-term giving arrangement from the truck’s future revenues … “something we did so that our driver knew that we stood with her,” Vraitch said. “Women in trucking and diversity are really big things for us.” For any fleet owner, he stressed, “Your drivers are your most important asset. If you take care of your driver, they will take care of your customer, … your equipment,” you name it. 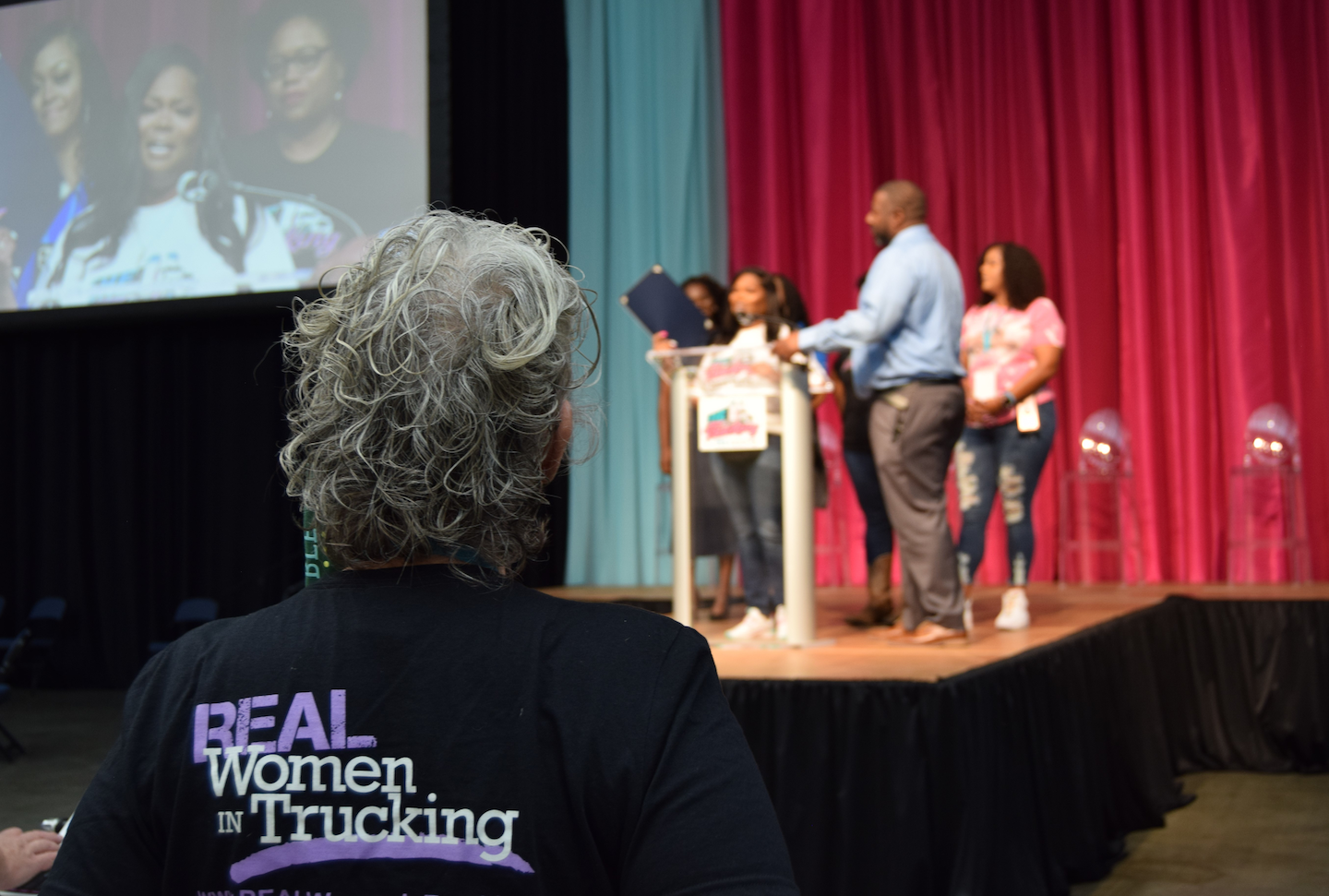 Idella Hansen here looks on near the beginning of the program as Sharae Moore welcomed attendees. Hansen was among several representatives on hand with Real Women in Trucking, whom Moore thanked during her opening remarks. 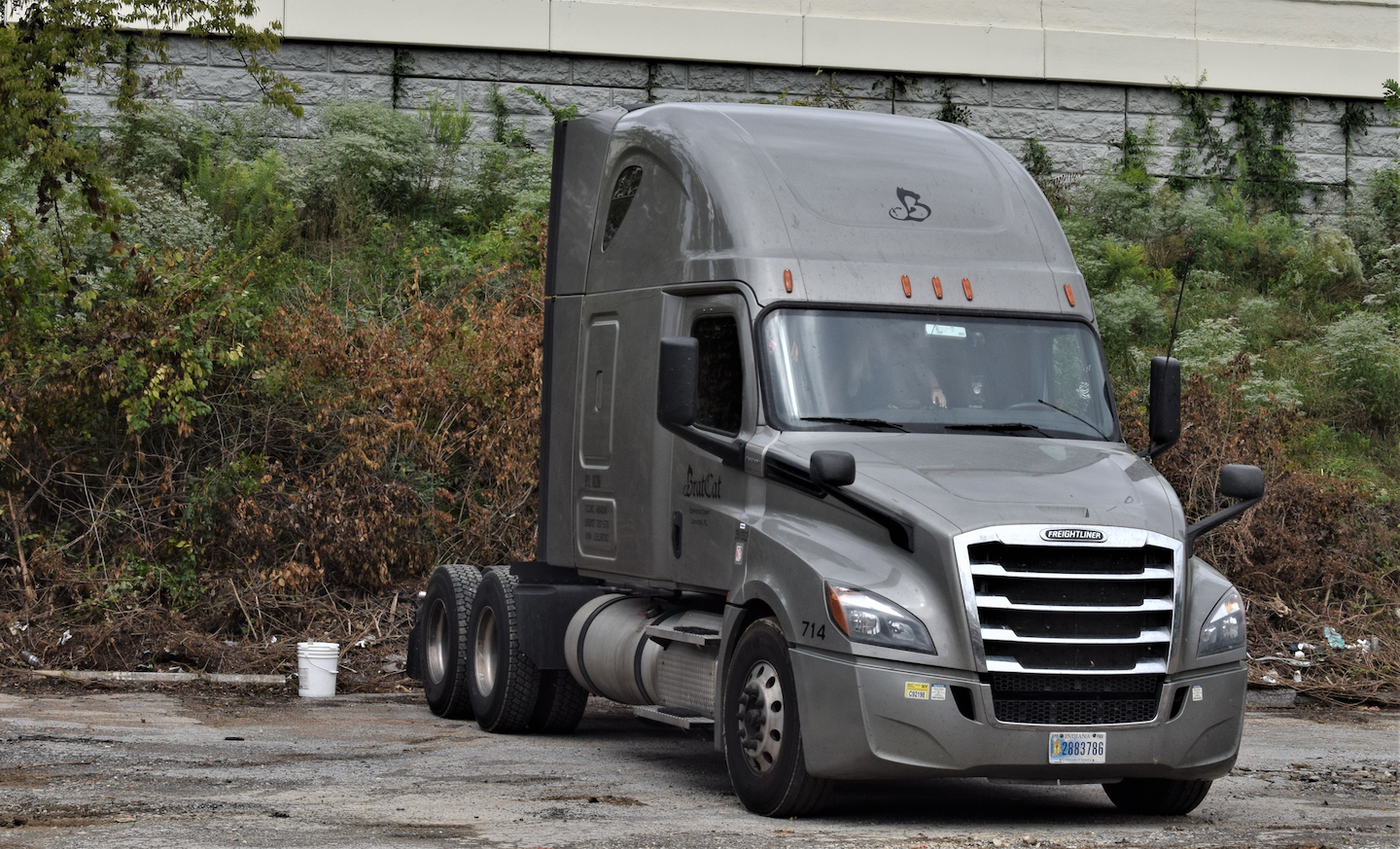 Parked near the convention center, BratCat Express independent owner-operator Brita Nowak was in attendance, fresh off being named a Trucking Industry Trailblazer at the July annual event of Real Women in Trucking, the Queen of the Road awards. She wasn’t the only trailblazer in attendance, either. Owner-operator Jess Graham also represented the organization there. 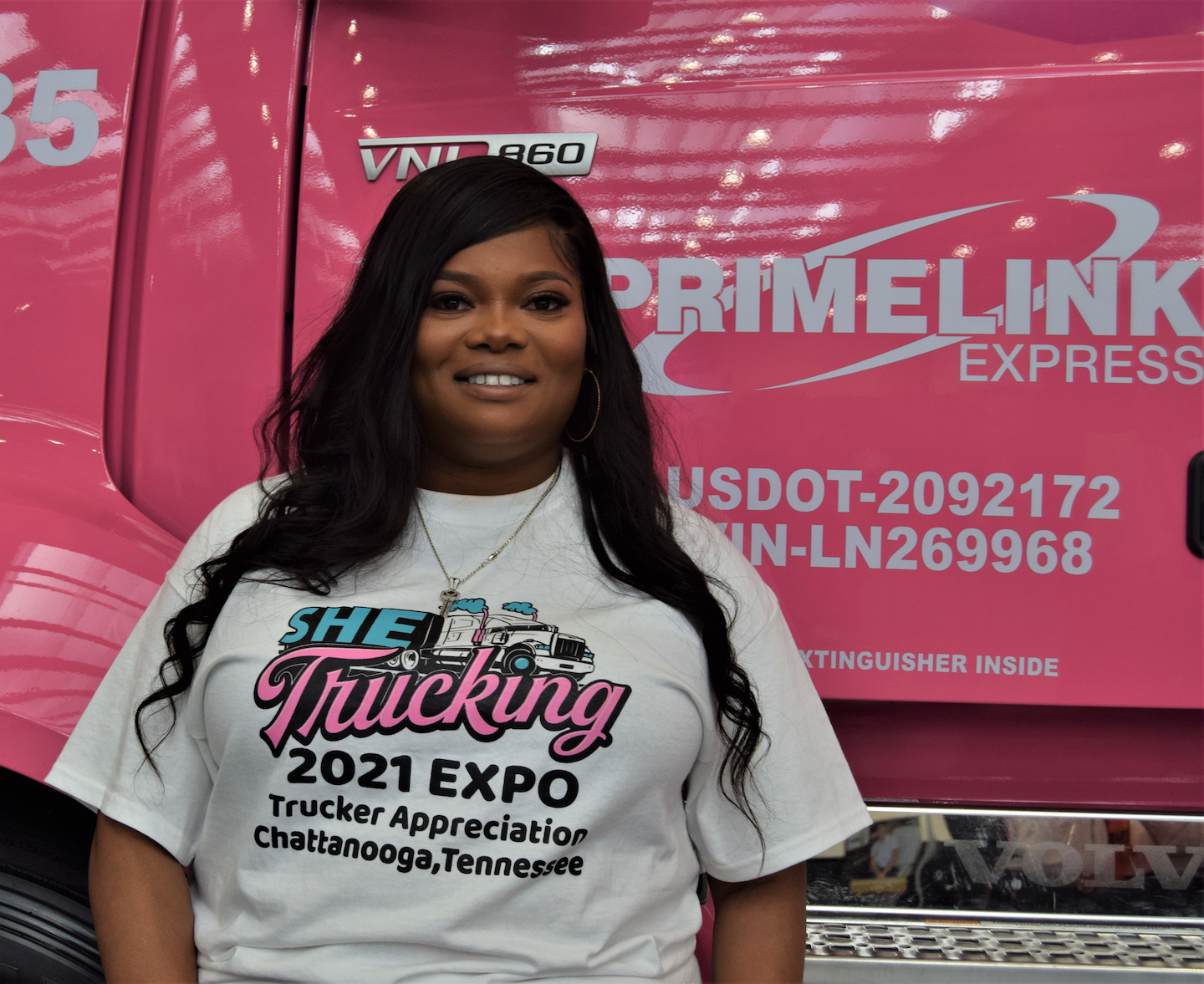 I think it’s a safe bet this event will have a long history. Keep up the good work, Sharae. (And for the rest of you, keep tuned for more here.)

The education of Latine journalists must be sustained: New bilingual reporting course…