Corporate racial and ethnic incidents soared in 2020, according to a recent study from Sustainalytics, a Morningstar company. From a sample of 206 global firms, there were 605 incidents between 2015 and the first quarter of 2021. Nearly half of these happened during 2020.

The study’s authors defined two types of racial and ethnic incidents: internal and societal. Internal incidents are controversies that involve a company’s treatment of its employees. Societal incidents stem from a company’s products, services, or operations that impact local communities.

Financial-services firms accounted for 63% of 2020 incidents. Most of these incidents came from banks financing projects that allegedly involved forced labor, contaminated water, and land disputes with underrepresented groups, including cases detailed in a 2020 Amazon Watch report.

At the same time, the Sustainalytics study found an increasing number of companies disclosing discrimination policies and diversity programs. From a sample of 2,500-plus firms, there was a 38% and 18% increase in the number of discrimination policies and diversity programs, respectively, between 2015 and the first quarter of 2021.

According to the authors, “[t]he findings of this report emphasize that global companies need to do more to manage concerns about racial and ethnic equity, not only by disclosing stronger programs and policies but also by ensuring that these initiatives are implemented in an effective way to mitigate related risks and controversies.”

A Focus on Race, Ethnicity, and Public Equity

Diversity has been a focal point of the responsible investment community for decades, but related initiatives gained traction last year with corporate leadership and investors. The murder of George Floyd in 2020 sparked worldwide protests and social movements, highlighting systemic racism and institutionalized discrimination.

In light of racial injustice and increasing investor attention on environmental, social, and governance issues, Sustainalytics looked at the racial and ethnic controversies from companies across the world. The study took samples from the Morningstar Global Markets Large-Mid Index, which holds more than 4,000 stocks worldwide.

The study also examined the number of discrimination policies and diversity programs, the strength of these policies and programs, and what companies can do to prevent future racial and ethnic incidents.

Martin Vezér, the study’s lead author, said it is common for large companies like Amazon to have more incidents because of their large operational footprints. A well-known brand and large global workforce will generally attract more media coverage, which is a key input into Sustainalytics’ controversy research.

The chart below shows the spike in internal and societal incidents between 2015 and the first quarter of 2021.

One way to gauge a company’s social responsibility is to look at its discrimination policies and diversity programs. And from a sample of 3,343 companies in the Morningstar Global Markets Large-Mid Index, the report suggests companies can do better.

The chart below shows that only 15% of the sample had diversity programs that went beyond legal compliance. And only 20% referenced conventions from the International Labour Organization.

The most disclosed program was listing types of discrimination a company is committed to eliminating–with 61% support. Although it had a majority of the sample’s support, an ESG investor may expect this low-stakes program to receive much more support.

The number of discrimination policies and diversity programs has significantly increased since 2015. And companies continue to adopt them following the racial injustice issues of 2020. However, there’s a disconnect: How can policies and programs increase while racial and ethnic incidents are rising? 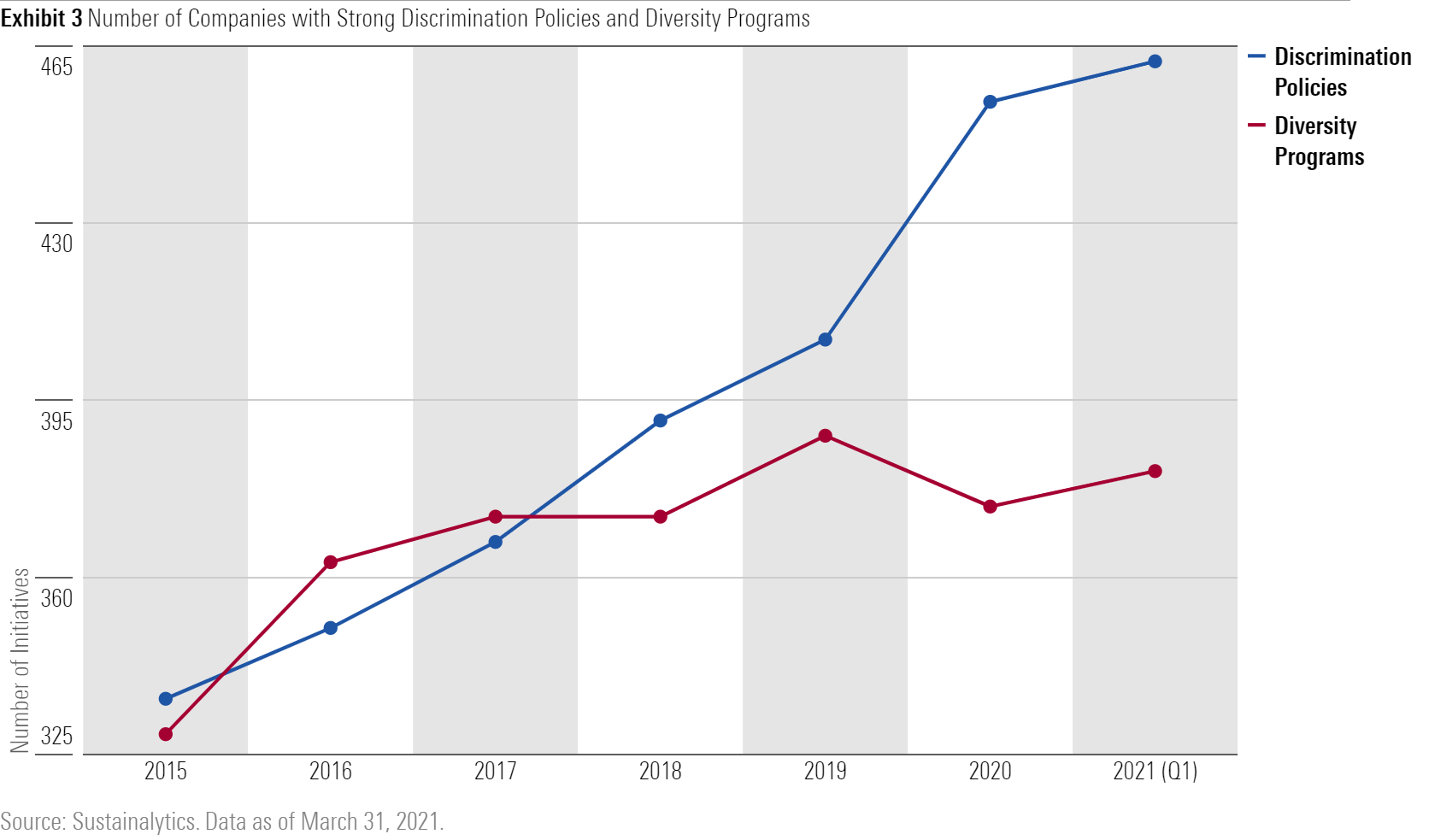 The study’s authors found that corporations with more initiatives tend to have more incidents (and vice versa). One explanation that they offer is that companies may be launching these initiatives after they were involved in related incidents.

“We still believe it is important for companies to introduce and strengthen diversity and anti-discrimination initiatives,” Vezér said. “Particularly in industries with high exposure to ESG controversies, strong programs and policies can help mitigate those risks.”

This result suggests that looking at how many disclosures a company has isn’t the best indicator of social responsibility. Rather, social and governance risk analysis should go further and see how effective these initiatives are at preventing incidents.

To reduce racial and ethnic incidents, companies need to create strong discrimination policies and diversity programs and enforce them accordingly. If these initiatives aren’t effectively implemented, incidents will continue to rise.

District Administrator Details How She Reimagines, Redefines, and Redesigns Education through the School Library –…