2021 Minsk World Triathlon Level 1 Coaches Course was postponed from 2020 due to the COVID-19 pandemic. This was the first coach education course in Belarus.
Marуia Charkouskaya-Tarasevich, Secretary-General, Belarusian Triathlon Federation
“Belarusian Triathlon Federation was happy to host the first-ever WT Level 1 Coaches Course in Minsk. The course was a brilliant opportunity for Belarusian experienced coaches and young coaches to have access to the coaches education program created by the WT and delivered by international facilitators Zeljko Bijuk and Alexander Kochetkov. 14 coaches from Belarusian sport state schools and triathlon clubs had 5 busy days of theoretical studies and practical sessions. For some of the coaches, the coaching methods offered by Zeljko and Sasha were absolutely different from what they used to study and practice locally. It is vital for a coach to learn from the best international practices in order to achieve better performance of his/her athletes. And the participants had a great chance to learn and try new effective methods of coaching and share their own experience with their colleagues. I hope that the coaches will be able to use all the knowledge and skills they got during the week of the course in our local environment.”

Participant testimonials
Safya Kryvetskaya
“I really enjoy the course. I feel that I’m getting more understanding of how to coach, getting better as a coach. I appreciate that the facilitators respect our opinion and our mistakes, help to develop and to translate our ideas into reality, convey our ideas. Some seemingly obvious things are shown from a different angle. It’s really cool.”

Hanna Maksimava
“Classes are interesting, facilitators are conducting classes in a variety of ways. The theoretical part takes place in the form of group discussions, lectures and exercises.
The practical part allows us to gain new experience in coaching, learn about new exercises that I will use with pleasure in my coaching.”

Aleksei Zasim
“I get from the course a detailed explanation of all the elements in triathlon from a professional point of view. The course helps to unite the team and cheer up.”

Aliaksandr Markovich
“Very interesting course. Coaches help me to look at my mistakes from the outside point of view. Informative and well structured.”

Alena Tsimashenka
“I’m enjoying the course in triathlon! That’s what I need for my development and coaching. The facilitators are very professional and skilled. The practical parts are very dynamic and useful.”

The key mission of development at World Triathlon is to “empower NGBs to develop self-sufficient programs that strive for sustained competitive excellence on all levels”.

In order to see constructive change, sport is a prism through which we can often see that. Because it is absolutely fine to consider, for instance, a new way or ways to see things differently. To approach that, it means broadening your horizons.

The first few days of December were a regal celebration for World Triathlon generally, for Asia Triathlon regionally and for Saudi Arabia specifically. Especially during such mad times around the world. As a new emerging NF, Saudi Arabia Triathlon Federation successfully completed the 2021 Al-Khobar World Triathlon Activator Community Seminar. Four days of crash work, operated by Firas Al-Hmood (JOR), Franz Studer (RSA) & Alpar Nagy (HUN), were highlighted with a successful local sprint triathlon with more than 200 participants and with outstanding female participation from the region.

Ali Magboul, NF President & Electrical Engineer, stated afterwards: “It was very interesting. It was really nice and comprehensive. The way you do it makes us feel like we are part of a nice family”. He also added: “My highlight was meeting people from World Triathlon and realising how much data we have access to – without any cost and at any time. It is time to collaborate further and work on developing our national coaches and technical officials.”

On the other hand, Jude Jamjoom, NF VP, added: “It was more than expected! It was not only best practices. But it was about how things are done properly.” Moreover, “Franz mentioned something which rang bells! Engaging home-grown talents and making sure that it is all-inclusive”. After being asked: Do you believe that the activator course helped you shape your future strategies? Miss Jamjoom answered: “Of course! It was all about accelerating… but now it is no longer like that. It is going to become nurturing the environment, and creating an eco-system that will sustainably grow the sport.

Dr. Dina Al-Tayeb, dentist, board member at Saudi Triathlon and the first female and Saudi person to do a triathlon, also expressed her thoughts: “I loved the seminar! I have attended many courses but this one had so many new things to learn. I really liked the part where we combined theory with practice. Especially on the event’s day.”

Last but not least, Miss Talah Al-Hashimi, mother of three and technical committee member at Saudi Triathlon stated: “It was fun and eye-opening. And we as females have all the support from our NF and ministry of sports, especially after better understanding the key roles of an emerging federation”.

Finally, Alpar Nagy – World Triathlon Facilitator – expressed his gratitude for such an opportunity and his positive thoughts regarding the outcomes of this course.

The World Triathlon Technical Official Course in Oman was the next step, after helping implement the inaugural Duathlon Series in Oman. The Oman Triathlon Committee is set to deliver the first series of Women’s Duathlon events in October and December 2021. Baida Alzadjali, a representative on the World Triathlon Women’s Committee, champions the development of triathlon in Oman and is part of the local organising committee for Oman Women’s Duathlon events.
The sport of triathlon is developing in Oman with the number of local athletes with the number of participating athletes rising in Oman Triathlon Committee’s first event in 2020 to 50 local athletes. The female numbers are still very low at 3 athletes, who have competed in different events in the last few years. 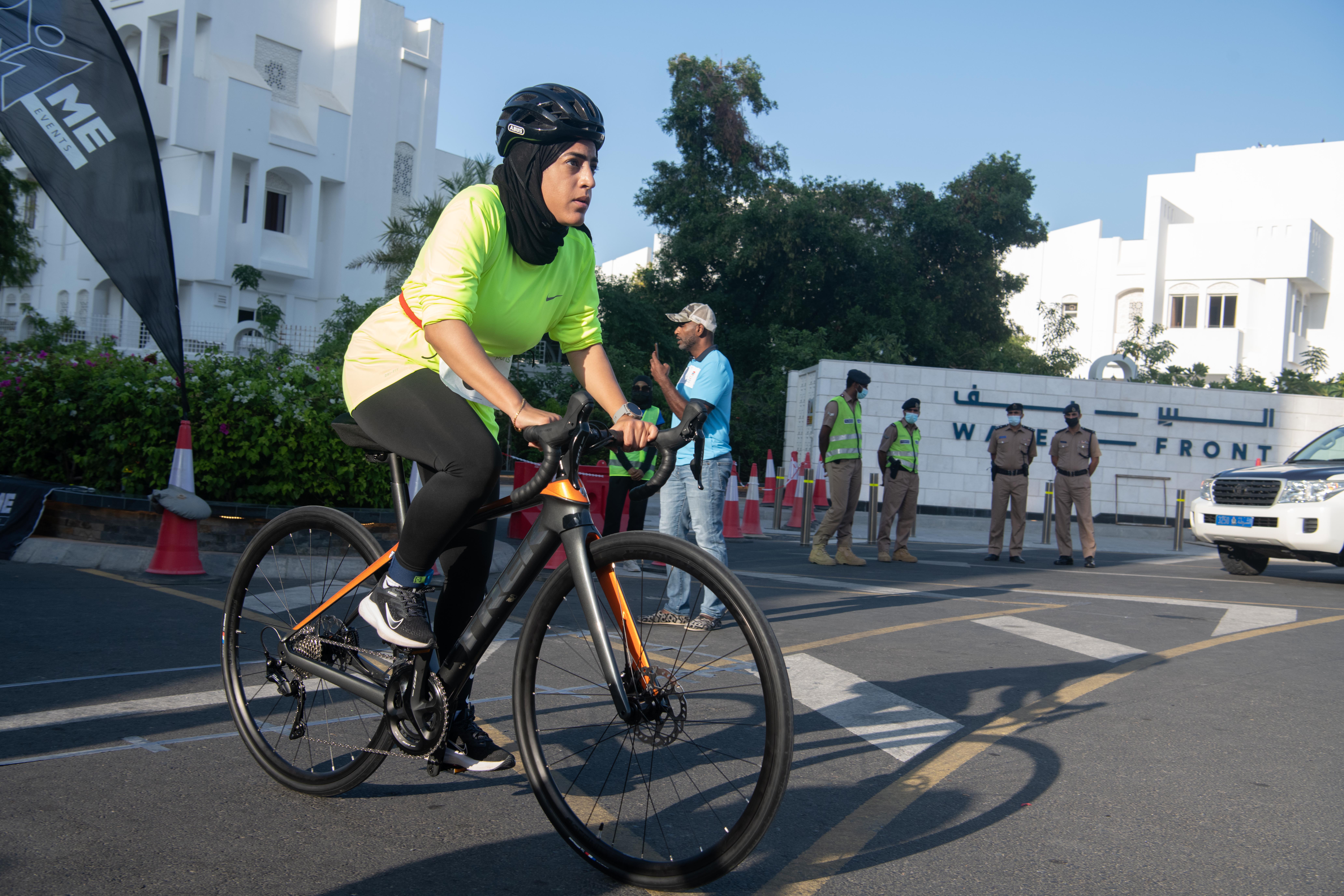 2021 Madrid World Triathlon Technical Officials Level 3 Seminar took place in Spain from Thursday 25 to Sunday 28 November 2021. The course was invitational based on eligibility requirements and ran in accordance to the New Certification Program, where Level 3 officials are separated to Level 3a and Level 3b. 20 Technical Officials from 15 different countries were represented at the seminar in Madrid.

Similar to the 2019 edition (where World Triathlon Development included important Facilitator development elements into the face-to-face delivery in Incheon by having Emma Brunning (GBR), World Triathlon Coach Facilitator Developer on site, this year’s courses also had this important focus.
Adjusting to fully online delivery made it necessary to introduce various Facilitator roles:
• Cohort Facilitators were there for their dedicated groups throughout the full duration of the course as main points of contact and tutors responsible for assessments.
• Seminar Facilitators took some load off the shoulders of Cohort Facilitators by delivering online live sessions with necessary preparations and follow-up.
• We also had some Guest Speakers jumping into the seminars bringing their experiences and insights to the table.
As all online sessions (Facilitator Open Hours and Seminars) were recorded, not only participants had the option to review them, but Facilitators and World Triathlon Development also. Self-reflection, peer bench-marking and reflections, and to-the-point feedback from the Facilitator Developer all became integral parts of the online delivery. This is something new that we didn’t have previously.
As an out-comes of this intense and various facilitator development, World Triathlon has created a Coaches Online Course Delivery Guidelines and will release World Triathlon Coach Facilitator Policy and Guidelines in January 2022.

For more information on World Triathlon Development and Education Programmes visit the website.

Why Diversity Trainings Don’t Work: The Empty of Empathy

Why learning about gender diversity is urgent | openDemocracy

Basnight to retire from Hyde Schools; Angie Todd is elected board of education chair…

The Global Search for Education: Philip Kholos on How Meditation and Martial Arts…