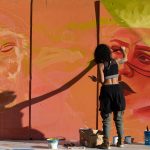 Large wooden panels outside a Kaiser Permanente building in downtown Oakland will soon be transformed into colorful art in support of the social justice movement and will ultimately be housed permanently in the Black Cultural Zone at the new Liberation Park.

Kaiser Permanente is donating the mural as part of its commitment to advancing equity, inclusion and diversity in our community. The partnership with ABG Art Group and the support being provided to local Black artists will result in a dynamic display representing racial equity and justice for all.

“Kaiser Permanente is dedicated to ending systemic racism in our nation and breaking down barriers to equality,” said Yvette Radford, vice president, Kaiser Permanente Northern California External and Community Affairs in the November 6 announcement. “As an organization with deep roots in Oakland, we want to do our part to help our community heal by showcasing the amazing contributions of Black artists and creating an inspirational-piece of art to remind us all of the importance of social justice, inclusiveness, and racial equity.”

Two well-known Oakland artists are currently creating the mural on wooden slabs outside of a Kaiser Permanente building on the corner of 20th and Broadway streets. ABG Art Group is one of OakArtist Rachel Wolfe-Goldsmith paints a mural highlighting equity and diversity on a Kaiser Permanente building at 20th and Broadway streets in downtown Oakland. Kaiser Permanente is donating the mural as part of its commitment to advancing equity, inclusion and diversity in our community. The partnership with ABG Art Group and the support being provided to local Black artists will result in a dynamic display representing racial equity and justice for all.

“We are honored and excited to partner with Kaiser Permanente and curate this amazing art installation,” said Sorell Raino-Tsui, director ABG Art Group. “Kaiser Permanente has shown their deep commitment to the art community by sponsoring this piece, and I couldn’t be happier to bring two of Oakland’s best AfricanAmerican artists together to create something special.”

Artists Rachel Wolfe-Goldsmith and Joshua Mays have deep ties to the Oakland community. Both have created some of the city’s most signature public art displays representing their cultural history and beliefs.

Wolfe-Goldsmith is an American painter and muralist, who is primarily self-taught. She is a large-scale muralist and has created murals throughout the United States, Costa Rica and Australia.

She is excited about the creation of the mural: “Amidst uncertainty and unrest, it is a crucial time to use art to push culture forward.”

Mays is an American painter, illustrator and muralist whose work typically features Black subjects in fantastical settings. In 2018, San Francisco Magazine named him as one of the “100 artists putting the East Bay on the map”.

Mays has created other murals in downtown Oakland and recognizes the importance of this piece: “With all that is unfolding in the landscape, I’m thrilled to use this platform to express all that is available within the current moment. I expect, through color, texture and narrative, we create a piece that reveals and transmits much needed doses of hope, perspective and possibility.”

The mural will take about two weeks to create and will remain temporarily on display in downtown for several months before it is permanently moved to the Black Cultural Zone, inside the new Liberation Park, which will showcase art that has cultural significance to the community.