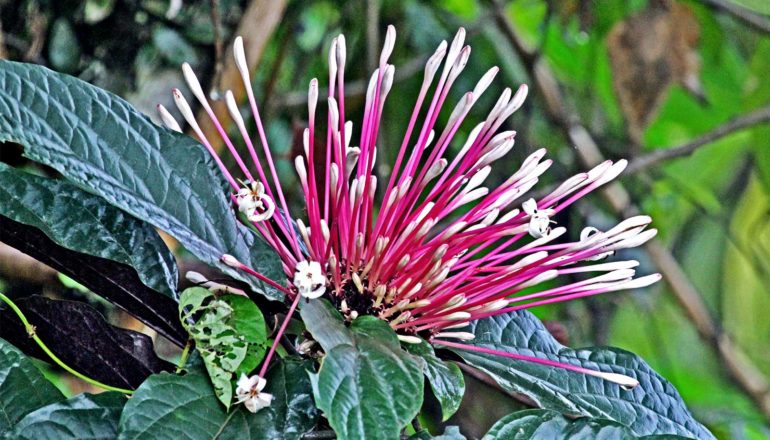 In terms of plants, New Guinea is the most diverse island in the world, according to a new study.

The study presents a list of almost 14,000 plant species, compiled from online catalogues and verified by plant experts. The results are invaluable for research and conservation, and also underline the importance of expert knowledge in the digital era.

Almost 20 times the size of Switzerland, New Guinea is the world’s largest tropical island. It features a complex mosaic of ecosystems—from lowland jungles to high-elevation grasslands with peaks higher than Mont Blanc.

Botanists have long known that this mega-diverse wilderness area is home to a large number of plant species. Efforts to identify and name thousands of plants collected in New Guinea and archived in herbaria all over the world have been ongoing since the 17th century.

However, since researchers have worked mostly independently from each other, a great uncertainty remains as to the exact number of plant species, with conflicting estimates ranging from 9,000 to 25,000.

“Compared to other areas like Amazonia, for which plant checklists were recently published, New Guinea remained the ‘Last Unknown’,” says Rodrigo Cámara-Leret, a postdoctoral researcher in the lab of Jordi Bascompte in the University of Zurich’s evolutionary biology and environmental studies department.

Under his lead, 99 scientists from 56 institutions and 19 countries have now built the first expert-verified checklist for the 13,634 vascular plant species of New Guinea and its surrounding islands.

The researchers began their large-scale collaborative effort by compiling a list of plant names from online catalogues, institutional repositories and datasets curated by taxonomists.

“Such high endemic species richness is unmatched in tropical Asia…”

After standardizing the scientific names, 99 experts on New Guinea flora checked almost 25,000 species names derived from over 700,000 individual specimens. For this, they reviewed the list of original names in their plant family of expertise and assessed whether these names were correctly assigned in the online platforms. Finally, an independent comparison was performed between the list accepted by experts and a list contained in “Plants of the World Online” for New Guinea.

The resulting checklist contains 13,634 plants, demonstrating that New Guinea has the world’s richest island flora—with about 20% more species than Madagascar or Borneo. By far the most species-rich family are the orchids and almost a third of the species are trees. One particularly remarkable finding is that 68% of the plants are endemic—they are only found in the region.

“It means that Indonesia and Papua New Guinea, the two states into which the island is divided, have a unique responsibility for the survival of this irreplaceable biodiversity.”

The new authoritative checklist will improve the accuracy of biogeographic and ecological studies, help focus DNA sequencing on species-rich groups with high endemism, and facilitate the discovery of more species by taxonomists. Thousands of specimens remain unidentified in the collections and many unknown species have yet to be discovered in the wild.

“We estimate that in the next 50 years, 3,000 to 4,000 species will be added,” says coauthor Michael Kessler, scientific curator of the botanical garden of the University of Zurich. These efforts will be important for conservation planning and modeling the impact of changes in climate and land use.

The collaboration also underscores that expert knowledge is still essential in the digital era—reliance on online platforms alone would have erroneously inflated species counts by one fifth. However, many of the New Guinea plants experts are already or soon to be retired, and almost half of them are non-residents. The researchers therefore advocate building a critical mass of resident plant taxonomists.

Policy-wise, the study shows that long-term institutional and financial support is critical if significant advances are to be made over the next decades.

“Our work demonstrates that international collaborative efforts using verified digital data can rapidly synthesize biodiversity information. This can serve as a model for accelerating research in other hyper-diverse areas such as Borneo,” says Cámara-Leret. “Such initiatives pave the way for the grand challenge of conserving the richest island flora of the world.”

The research appears in Nature.

The post New Guinea is #1 for island plant diversity appeared first on Futurity.

The U.S. Labor Department Is Recruiting HBCU Graduates In A Wide Range Of Disciplines

Six NPS Board of Education candidates advance to general election

The Global Search for Education: Climate Activist Sophia Lana Has 3 Key Takeaways from Her Interview with UNESCO’S…

‘The cruelty has no bottom’: Legal expert blasts TX Gov. Abbott for trying to ban some children from public…