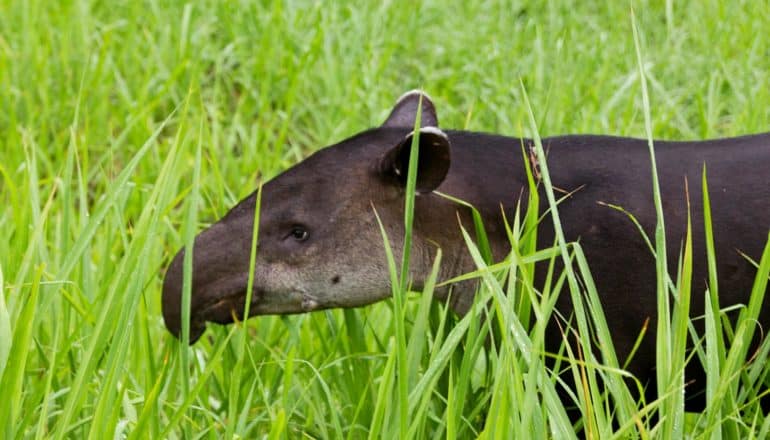 In wildlife conservation, diversity often refers to the variety of species in an ecosystem. But ecologists also study functional diversity—the abundance and variation of traits like body size, diet, and reproductive rate. Measuring trait diversity can happen independent of species diversity and provide additional insight about the overall health of an ecosystem.

In the study, Gorczynski and Beaudrot analyzed more than 4,200 photos of mammals taken in the park between 2007 and 2014 and found the diversity of mammal traits within the park did not decline, despite deforestation that fragmented the forests on more than half of the surrounding private lands.

There were no mammal extinctions in Braulio Carrillo during the eight years of the study, and Beaudrot, an assistant professor of biosciences, says the trait analysis revealed a level of functional redundancy that could allow the park’s ecosystem to continue functioning even if some of its mammals go extinct in the future.

“It’s well-established that national parks preserve species, and our results show national parks can be more resilient than expected, at least over the time period we examined,” she says.

Beaudrot says the results are encouraging, but that it would be a mistake to assume that all national parks are as resilient as Braulio Carrillo.

“This shows what’s possible, but the situation could be very different at other parks or over longer time periods,” she says. “We need comparable studies for other parks, other protected areas, and nonprotected areas.

“This is an area where data science can make a difference,” she says. “Some of the data needed to make those comparisons are already available.”

The study used photos from the Tropical Ecology Assessment and Monitoring (TEAM) Network, which has operated a camera-trap network covering more than one-third of Braulio Carrillo since 2007. The analysis included jaguar, ocelot, and other cats, tapir, tayra, coati, racoon, javelina, deer, opossum, and a number of rodents.

Support for the research came from the Gordon and Betty Moore Foundation, HP, the Northrop Grumman Foundation, and other donors.

The Weekly Dose: @Workday Ups its Game in Belonging and Diversity!