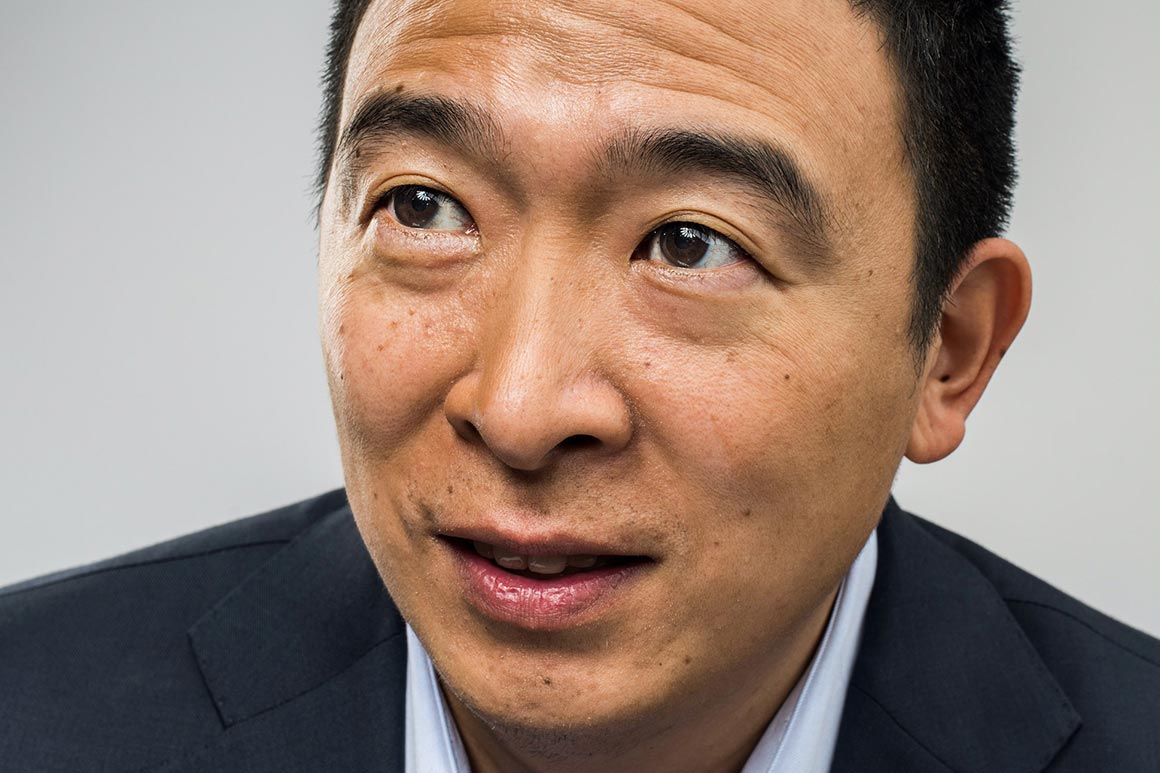 It’s a quandary Andrew Yang didn’t see coming but is starting to embrace: Being the last candidate of color in the Democratic primary with sizable support.

For most of the primary season, on the off-chance Yang talked about race, it was mostly to crack Asian jokes. He’s stuck to his bread-and-butter issue and policy prescription: the threat of computer automation and a universal basic income.

But being the only person of color on the debate stage in December, and looking around as the other candidates of color end their campaigns, Yang has begun to feel “a bit of extra pressure” to talk about race in a way he hasn’t before.

“I was very cognizant of being the lone candidate of color [in the debate], and I said it was an honor and disappointment. Race has not been the central theme of my campaign from the beginning,” Yang told POLITICO in an interview. However, “it’s more natural to talk about it when you’re literally the only person of color on a national debate stage. Being the lone person of color on the stage in December was important.”

For weeks, Yang and his campaign have been criticizing the Democratic National Committee’s requirements — specifically its polling threshold — that shut him out of Tuesday’s debate. It’s a change of tune for the entrepreneur-turned candidate: During an appearance with POLITICO reporters and editors in September, Yang called the party’s debate rules “fair and transparent” and “incredibly helpful because then you just know what to aim for.”

But Yang said in the interview that he’s come to recognize the toll he thinks the DNC requirements have had on diversity in the debates. The six candidates participating Tuesday are white.

Yang said the makeup of the field reflects larger disparities between white people and people of color in the United States.

The DNC has stood by its requirements.

“We’ve set a remarkably inclusive and frankly low bar throughout the campaigns and I’m proud of that. And as a result of that we did have the most diverse field in American history,” chairman Tom Perez told CNN Tuesday.

Yang isn’t deterred by news of his “friend” and “brother” Sen. Cory Booker dropping out this week. Booker cited money constraints as his reason for leaving the race, a problem Yang doesn’t have after raising $16.5 million during the last quarter of 2019.

The DNC hasn’t announced requirements for any of the three February debates, including how results from the Iowa caucus will factor in. But Yang said he’s confident he’ll qualify for them.

At the same time, Yang argued that the debates aren’t make-or-break for his campaign.

“Anytime you have the chance to speak to a large number of Americans, it’s a great opportunity,” he said. “The debates are helpful, but I don’t think that they’re as central to the process as they might have been in another cycle, or frankly, to another kind of candidate or campaign.”

Yang’s base of support, though it doesn’t seem wide, has proven deep enough to garner huge sums of cash, basically whenever he asks for it.

And if there’s no movement on the debate front, Yang signaled his campaign will try to become “less reliant” on mainstream media for exposure.

“If you look at the course of this campaign,” he said, “we came up through nontraditional media outlets and podcast interviews — the most popular of which have been viewed millions of times to an audience that’s comparable to that of a debate.”