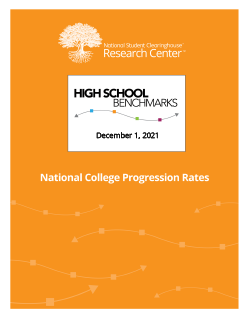 A new report from the National Student Clearinghouse Research Center finds that college enrollment rates for 2020 high schools graduates have fallen significantly, especially for students from schools with a large percentage of students from underrepresented groups.

The study found that very few of the students from all groups. who did not enroll in 2020, took a gap year and enrolled in the fall of 2021.

The report also examined college graduation rates for students who entered college in 2014 who had earned a degree by 2020. The study found that when minority and income levels were cross–examined, enrollment and completion gaps between higher– and low–income high schools at each minority level were substantially larger than the gaps between high– and low–minority schools regardless of income levels. High school graduates from low–income and high–minority high schools completed college within six years at the lowest rate percent), a gap of percentage points from the rate for high school graduates from high-income and low-poverty schools (52 percent).

Leave Me Alone But Don’t Leave! ––Loneliness and Social Anxiety as a College Student During COVID-19 – Mustang News