How Kansas City-Area Education Has Changed During the Pandemic 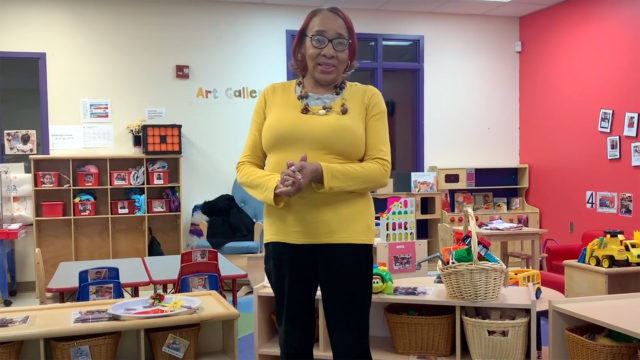 In 46 years as an educator, Ivera Williams never had to use a computer to teach class.

Then the pandemic hit. Williams, who is an early childhood educator at St. Mark Center, said staff were told they were moving school online through June.

“With the, uh, pandemic, none of us were prepared,” she said.

Converting to online teaching was a challenge. She’d never heard of Zoom before March, but she had to make it work.

Because she works with infants and toddlers, her work is traditionally hands on, with toddler-size furniture and in-person play time. These activities help build gross motor skills in her youngest students. They learn these skills by crawling, climbing furniture or stacking toys.

But now the kids are at home, observed only through a screen. Williams said one of her toddlers even reached out to her through the iPad one day.

“He saw us and he knew that it was us,” she said, chuckling.

Another challenge was not being able to prepare her kids for the next grade. Pre-pandemic, kids got to say goodbye to their teacher, hugs and all. But not this year.

It has also been difficult to find a time where all parents can check-in, again on Zoom.

Many, if not most, of the parents work full time. Among those are frontline health care workers, she said. For those who are able, they work and aid their children with online classes and activities.

Williams is one of many educators in Kansas City whose way of teaching has changed for the foreseeable future because of COVID-19. In Kansas City, a patchwork of different decisions has made it difficult for parents to navigate work and schooling from home.

One Kansas City parent, Annie Watson, outlined the difficulty in an interview with Flatland last month. As a former early childhood educator and parent of four young children, she understands.

Watson said school systems should help educators, parents and their students to find a way to make decisions “that are more child and family centered.

“I am now navigating four different schedules and four different, you know, learning platforms on top of working a (full-time) job,” she explained, though she acknowledged that she’s fortunate to be able to work from home.

However, that’s not always the case for other households. She thinks leaders have missed the opportunity to rewrite systems that help kids who were already needing better support.

‘Time to dismantle it’

But it hasn’t been easy. In a word, he said he’s been “stressed” the past nine months.

“I just want my kids back in school,” Bedell said.

Early in the pandemic, the school district bought hotspots for students to ease some of the burdens that come with online learning. But the district had to spend an extra $6 million to fund those extra supplies, he said.

Accessibility to the internet and a computer, among other things, have highlighted the disparities that already existed in education.

“We’re looking at things a whole lot differently right now, as we think about the future of how we’re going to conduct schooling in this school system,” Bedell said. “If the system has not benefited the vast majority of (kids) that we serve for the last 40 years, then obviously it’s time to dismantle it. And it’s time to re-imagine how we can better serve this community. And this is an opportunity to do that with this pandemic.”

The Kansas City district is mostly distance learning these days, but Bedell hopes that in-person classes can resume once at least 70% of educators are able to get vaccinated.

For rural school districts, like in Osceola, Missouri, in-person school was the best way to go. Internet connections are spotty in hilly rural areas and some households have limited access to laptops and other devices.

“I’m not a techie guy, but I know that at my house, if we’ve got three people on a device, you know, nobody’s getting to do what they want to do,” said Michael Fransen, Osceola School District superintendent.

For the last several months, Fransen has been dedicated to getting students in his district back to the classroom safely.

He faces another obstacle. He only signed on as superintendent about one year ago. Just a few months into his new role, the pandemic struck.

Case counts in his county and in schools have gone up and down, he said, but October was the worst. About 90 students were quarantined and roughly a dozen staff members either tested positive for COVID-19 or were subject to contact tracing.

That has posed a number of complications. Teachers who are ill are replaced with substitute teachers. Older teachers also are wary of being in the classroom. So he’s had to keep the train moving while being mindful of how to limit the spread of the virus.

School is limited to four days a week so the cleaning crew can sanitize hallways, lockers and classrooms. Mondays are teachers’ days off.

“I worry about that stress level,” he added. “You need to disconnect whether that be through, you know, having a meal together or, or something.

“We said, ‘We don’t want you to worry about anything other than yourself and your family.’”

Fransen is also concerned about students – online and in-person – falling behind. Admittedly, he said, some students aren’t as engaged.

“The thing that I worry about is how’s that going to look in the fall of 2021, when we get back together,” he said. “Where will our students be?”

Fransen said he’s heard about students who took jobs to help family members who may have been furloughed or unemployed. This is an added challenge to the technological and mental health issues plaguing students today.

So, he and his staff have gotten creative. As he put it: “The one cliche that can tell you is that we’re building the airplane while we’re flying it.”

Adhering to social distance guidelines, the district has created internet cafes for students without internet access. For students who wish to do school at home or whose families are higher risk, he plans to send them a Chromebook.

“We all kind of pray for a normal day,” Fransen said. “You know, we all… hope that we’ll have that experience of what we had, you know, two years ago when COVID was nowhere to be seen.”

Though some schools around the U.S. are losing teachers and superintendents, these education professionals all say they’re sticking around. Whether they’re veteran educators, or district leaders, the goal now is to make school accessible with the tools they have.

Treasure trove of 2,000 fossils reveals life in Australia’s prehistoric rainforest before it turned into desert