Before Dr. Roland Mitchell, dean for LSU’s College of Human Sciences & Education (LSU CHSE), became an administrator, he worked on campus as an instructor while he finished his dissertation. He picked an inauspicious time to arrive.

“I moved the week of Katrina,” he recalled. “There were all of these narratives about Black folks from New Orleans coming down and being criminals.”

Suddenly, it was much harder to rent an apartment in Baton Rouge. 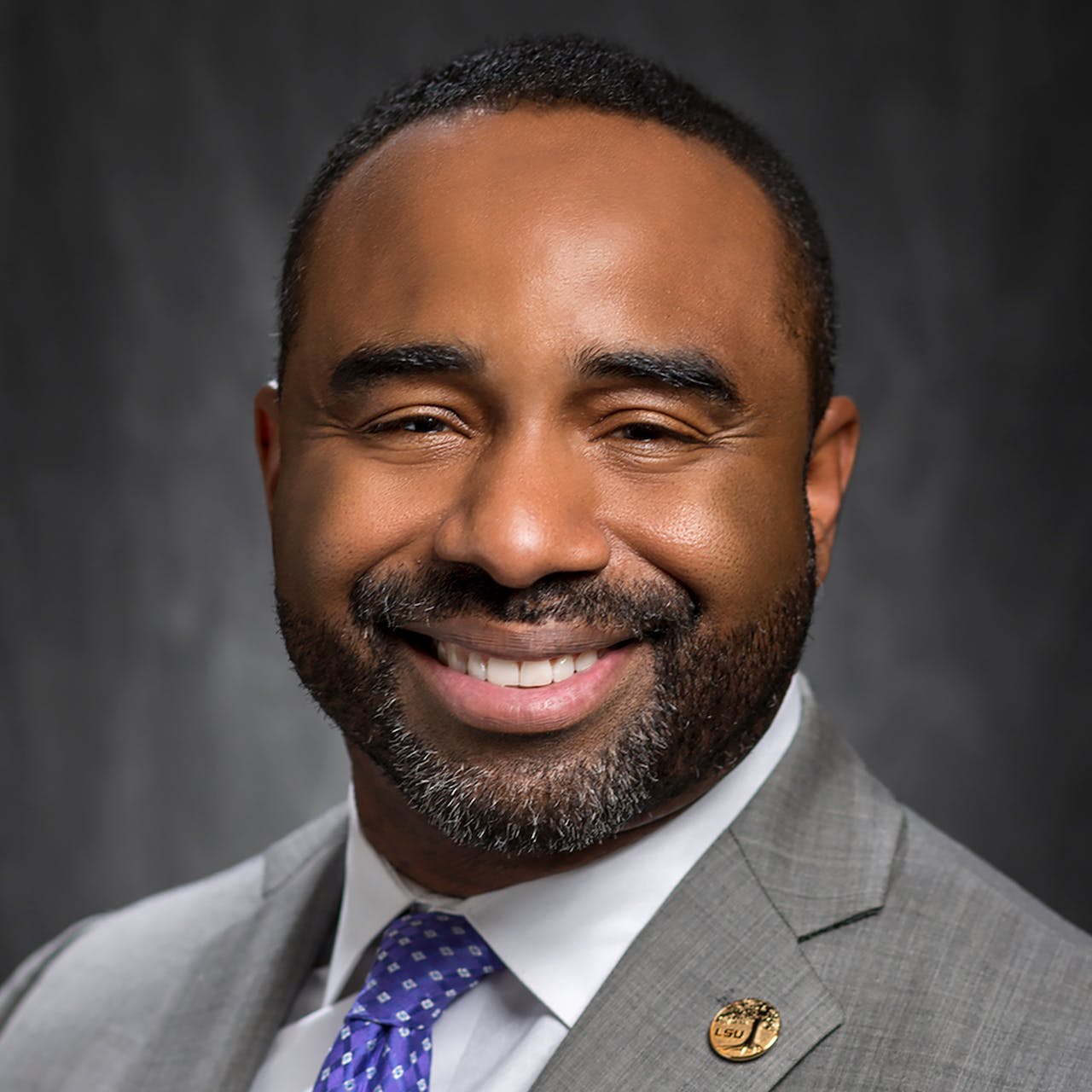 “When I told the [landlord] that I was new in town and trying to find a place, he had all these extra questions,” said Mitchell. “And one of things that he wanted to find out was, ‘So, what do you do?’ And I told him, ‘Oh, I’m a professor,’ and the guy’s response was like, ‘Yeah, right, prove it.’”

But Mitchell found a much more welcoming spirit on LSU’s campus.

“Folks in our kinesiology program were headed to the field house and would provide first aid services,” said Mitchell. “Our childhood educators would set up makeshift schools. Our librarians provided so much information and support. When there was this kind of trauma, they went in, instead of going out. To this day, it gives me great pride.”

The students whose actions inspired Mitchell were from the very school that he now leads as one of a handful of Black education deans in America.

“The thing that connects us is we’re all invested in improving quality of life in human communities,” said Mitchell.

And, by the looks of it, they are.

This year, LSU CHSE launched the Early Childhood Education Institute to study the care of children from birth, and the University Lab School (known as “U-High”) sends 97% of its graduates to four-year colleges. And faculty members have received several large grants recently, including almost $4 million to train social workers, nurses, and physicians to better care for patients with Alzheimer’s.

One of Mitchell’s primary goals as dean is to ensure collaboration and he is actively making sure that working together is incentivized.

“If we have a research award,” said Mitchell, “we’ll just say, point blank, the person who gets the award is going to be somebody who’s working across areas.”

His success has been largely due to his effective communication, say faculty members.

“His messaging is always trying to build bridges to show how all the schools are connected,” said Dr. Petra Robinson, director of faculty affairs and professional development at LSU CHSE.

The collaboration is paying off. This November, LSU CHSE announced a $4 million gift from Louisiana’s largest non-profit academic health center to create the Ochsner Wellness Center. It will provide exercise and medical facilities for the local community, a laboratory for kinesiology students, and for an expansion of physical and mental health programs for those on campus.

“There was an initiative to pull together different people from the schools to put together this proposal,” said Robinson, “and when you hear him talk about it, he doesn’t take credit for it in isolation; it’s always giving credit to the ways the different schools partner and come together.”

According to Robinson, Mitchell’s sensitivity is one of his greatest strengths. 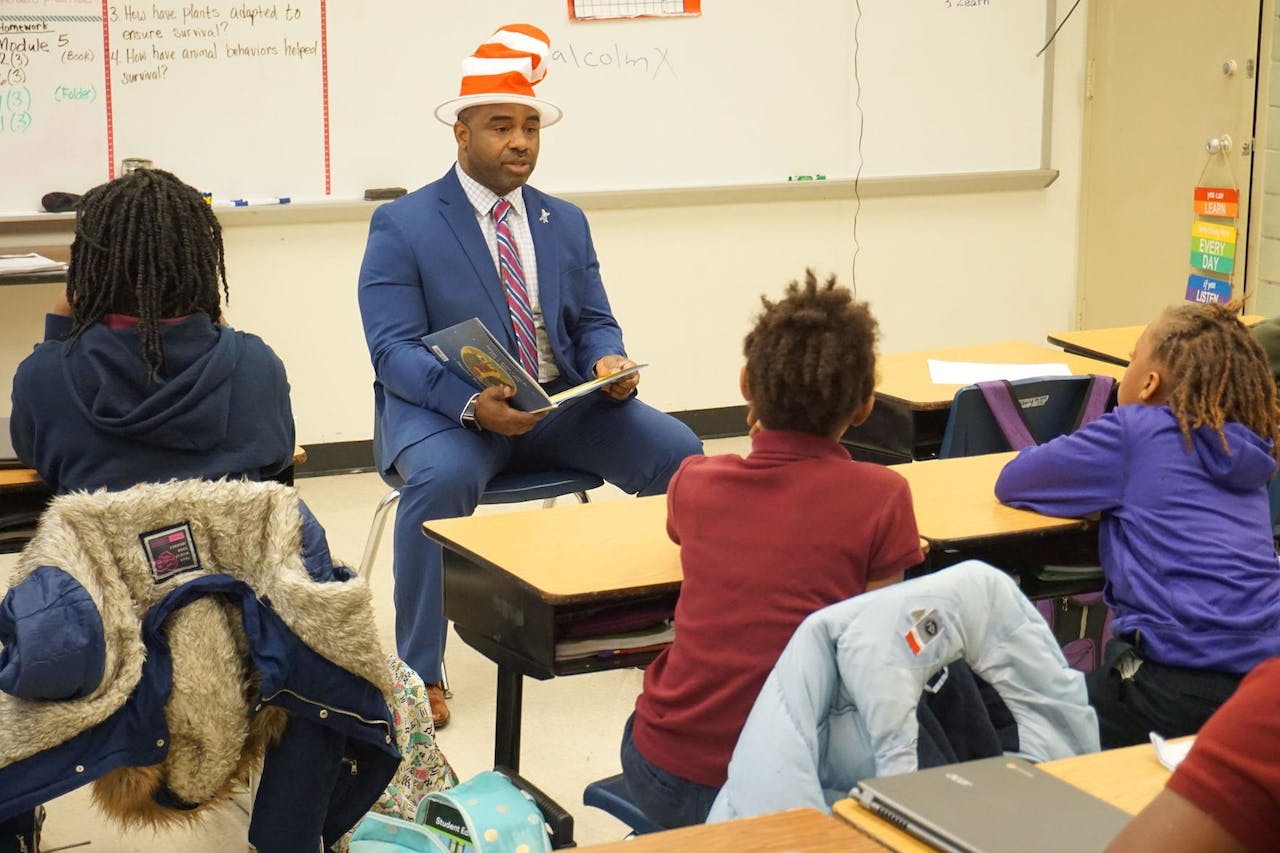 “He listens to everyone and wants to hear everyone’s perspective,” she said. “He talks with a genuine care for us. He seems to be so heartfelt. The college isn’t about him as dean, but about us as a family, working towards whatever vision we have.”

Mitchell’s willingness to engage openly and empathetically, even with those with whom he disagrees, is borne of his experience in the classroom, where some of his students had never encountered a Black male professor. Mitchell remembers an encounter with one student in his “Race and Gender in Higher Education” class that was especially pivotal. He had asked the students to write about the first time that they realized that they had a race or gender.

“He was a white guy from Mississippi, a brilliant student, but he just was not going to go there,” said Mitchell. “I remember him saying to me, ‘Maybe this stuff you’re talking about is legitimate, but if I acknowledge the things you’re saying, I won’t be able to have the same life that my grandfather had.’”

Mitchell could have found this revelation frustrating or even infuriating. Instead, he credits the student’s honesty with helping him think about how to reach other students with radically different backgrounds and perspectives.

“It would be easy for me to basically just hammer,” said Mitchell, “and say, ‘Oh, well, your grandfather had advantages that he didn’t deserve.’ But, at the same time, we just built a relationship where we’re having a conversation, and I have no desire to slam this guy. After that, we spent more time talking about, ‘What was it like growing up? Tell me about your granddad’s experiences. What do you want out of life? What are the fears? What are the possibilities?’”

Mitchell doesn’t think that he changed the student’s mind. But he planted a seed.

“Now, he’s had a different level of experience with an individual, as well as with the literature, that provide the opportunity for him to see the world a different way in the future,” he added.

This mindset has helped him through his exceptional but sometimes difficult journey through academia, during which he became LSU CHSE’s first Black full professor, first Black endowed professor, and first Black dean. Along the way, Mitchell has experienced plenty of microaggressions and more overt acts of racism, including a more senior colleague approaching him at a party and trying to pat him on the head.

But these gestures aren’t what bother Mitchell the most.

“They commit the act, they figure it out, and then they want to come back and process it with you,” he said. “And that’s the thing that I probably find the most frustrating. It’s absolutely exhausting.”

Even so, Mitchell doesn’t let such incidents prevent him from achieving his goals.

“I refuse to have colleagues I can’t work with. I never make an enemy. So, even that colleague, we’re good now,” he said, adding that the colleague later apologized. “Maybe I can do that because my siblings, my wife, my kid, my mom and dad have been really good to me. I don’t need validation from anyone else. What I need to achieve kind of takes the personal side out of it.”

And Mitchell envisions LSU CHSE achieving a lot more in the future.

“I want our college to be able to manage those big issues that matter,” he said.

He talks about applying work on coastal erosion in Louisiana to South America, and a partnership with NASA that may help address food insecurity in Baton Rouge. Ultimately, he emphasizes real service to real people.

“I want to move in the direction where, when you hear the College of Human Sciences & Education at LSU moved into your community, you know help is on the way,” he said. “We’re rushing in. It’s coming.”

The education of Latine journalists must be sustained: New bilingual reporting course…