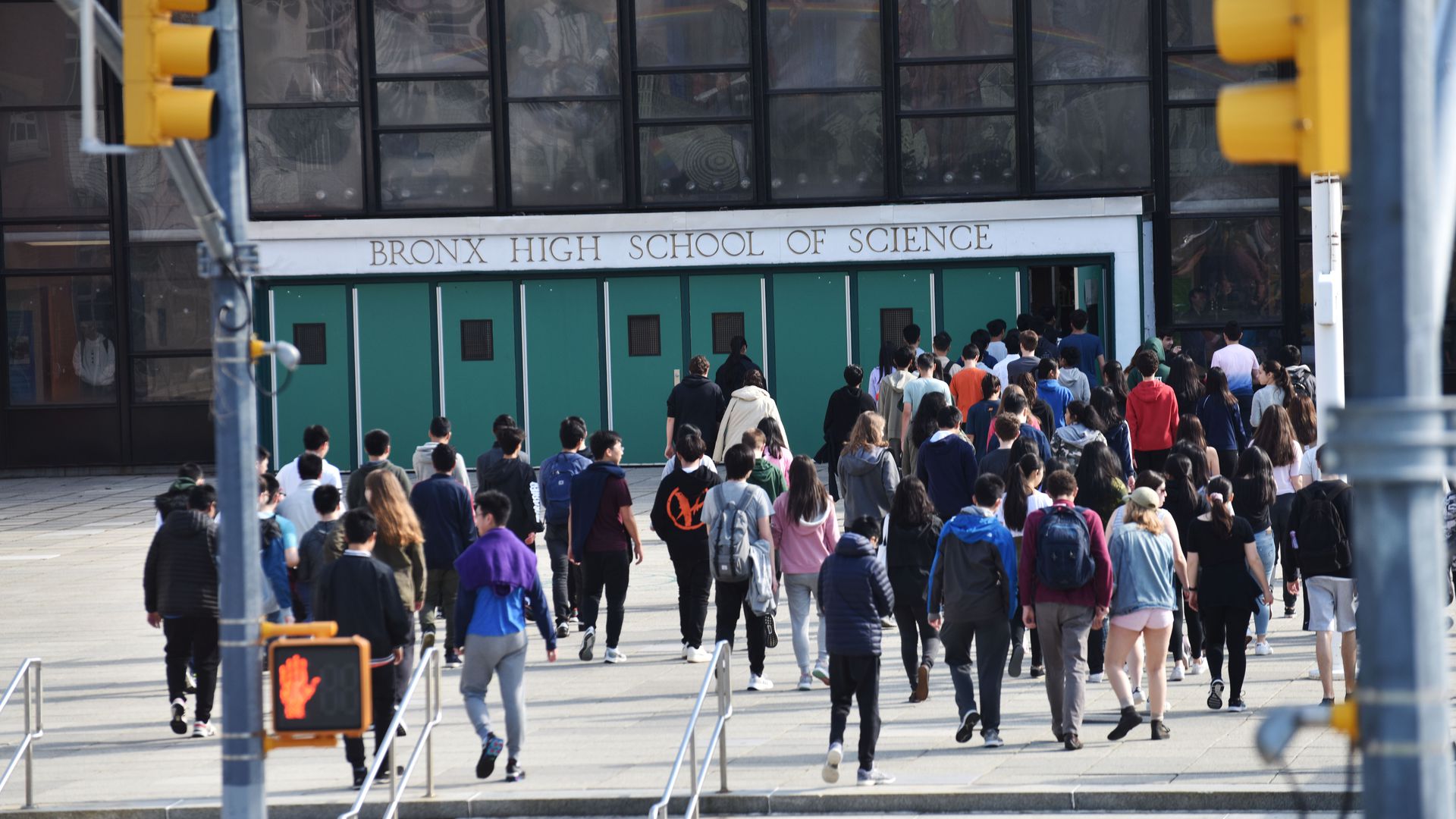 Bronx High School of Science is one of the city’s specialized high schools. The elite schools enroll few black and Hispanic students, but a program intended to boost diversity has done little to move the needle. | David Handschuh/Chalkbeat

Almost 35% of the roughly 1,350 offers for the Discovery program went to black and Hispanic students this year, up 4.7 percentage points from the previous year. Discovery is a summer program that offers admission to the specialized high schools to low-income students who score below the cutoff on an entrance exam.

Asian students continued to receive the most Discovery offers, at about 50%. That is about 4 percentage points lower than last year.

Asian students already make up a majority at these eight hyper-selective schools, like Stuyvesant and Bronx Science. Only about 10% of students at the specialized high schools are black or Hispanic, while those students comprise almost 70% of enrollment citywide.

In an effort to address those stark disparities, Mayor Bill de Blasio significantly expanded Discovery, accounting for 20% of all seats at the specialized schools this year, up from 13% last year. He also tweaked the criteria for who is eligible, so that students must come from schools where most of their peers are economically disadvantaged.

The program’s changes have been the subject of a legal challenge claiming that Asian students will be squeezed out of the specialized high schools, in violation of their civil rights. But a judge ruled that the city could move forward with the reforms as the suit drags on.

The Specialized High Schools Admissions Test serves as the sole admissions factor for the sought after schools. Only those with the highest scores land a seat. Almost 28,000 took the entrance exam this year. (A ninth specialized school that focuses on the arts accepts students through auditions.)

An ongoing battle has raged over the test, which many blame for shutting out black and Hispanic students. But many Asian families say the specialized high schools have been unfairly targeted, while other selective schools that enroll mostly white students have evaded any admissions changes.

Students have until May 15 to accept their Discovery offer. The city expects that not everyone offered admission through the program will end up enrolling, and have earmarked 800 spots to be filled among the exam schools — an increase from 500 last year. Students received Discovery offers from 112 middle schools where none had received a specialized high school offer through the traditional route, up from 67 the year before.

“This initiative alone does not move the needle enough for our students,” Schools Chancellor Richard Carranza said in a statement. “As we’ve continued to say, a single test does not capture a student’s abilities and until we change the approach, we will see the same results.”

‘Censorship Destroys the Very Diversity it Was Meant to Protect’: Former NSA Agent

Inclusivity leads to diversity: How men can be better allies for women in tech | IDG…

Only True Catholic Education Can Save Our Culture