“Diversity in Zelda” is an ongoing series in which we highlight the Legend of Zelda’s approach to inclusivity, spotlight relevant characters, and speak with Zelda fans from marginalized communities. It is our desire for the installments of this series to be received with open minds, and civil discussions between readers are encouraged.

When one thinks of The Legend of Zelda, and Nintendo as a whole really, images of all these larger-than-life characters and incredibly grandiose settings come to mind. The Zelda series has seen quite an evolution from it’s humble beginnings of just Link and the Old Man to a sprawling ecosystem of people living and surviving together in Breath of the Wild. And yet, I can’t help but notice that in 35 years, the Zelda series hasn’t evolved in some pretty key ways. Nintendo’s mantra has always been “we make games for everyone”… but looking at Zelda, that’s not exactly true.

Where are the Black characters in the Zelda series?

Take a second and think about that. If you can name a few off the top of your head, I salute you, because I was drawing a complete blank. And frankly, even if you can rattle off a few, ask yourself, how big of a role did that character play in that Zelda game? It’s not a very flattering picture, and my question today is why?

This isn’t a new issue or something we’re just figuring out is a problem by any means. Fans have been voicing this concern for years. But in the wake of 2020 and the social and racial reckoning that swept across the world, it seems the question has become more timely than ever. Why are there so few Black characters in the series? Why have other series’ seemingly surpassed Zelda in this regard? I look at franchises like Grand Theft Auto, Mass Effect, Horizon, Elder Scrolls, Halo, and more – some of the biggest franchises in the world – and see the representation of Black people everywhere. So why is Zelda falling behind? 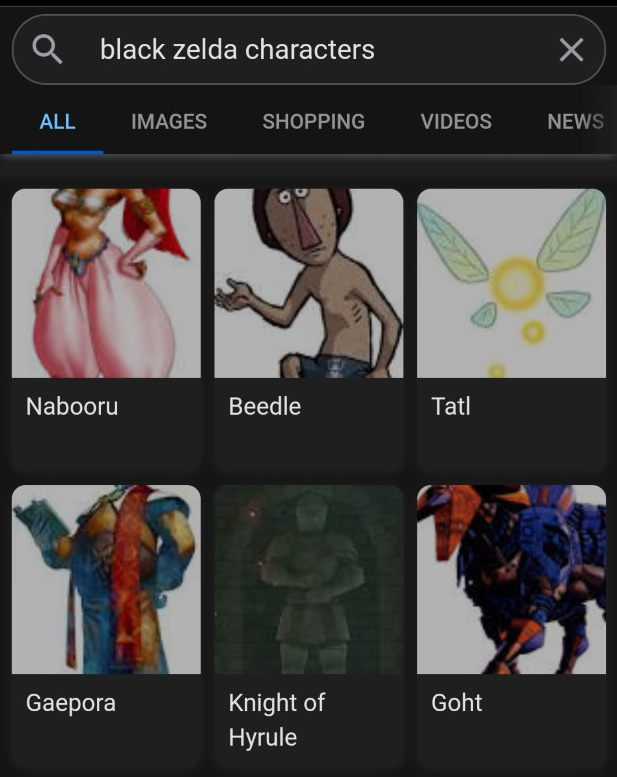 Maybe one of the reasons is that when you bring this topic up to fans, they tend to get very defensive. I can hear the comments already as I live and breathe; “Nintendo is a Japanese company, that’s why” or  “Zelda is a series filled with different races and creatures, calling it out for a lack of diversity is dumb!“. To which I would say… yeah, Zelda offers up a wide variety of incredible races that look visually striking and unique, which is great… but there are still no prominent Black characters in Zelda, and that’s a problem.

(For what it’s worth, Nintendo doesn’t use race-coding to depict Black characteristics onto any of these different races either, which is probably a good thing.)

If you want to take a step even further back, we can look at Nintendo and realize that this problem isn’t exclusive to the Zelda series. A quick perusal of the Super Smash Bros. Ultimate roster left me with some pretty damning stats: of the 51 humanoid characters, there was exactly one Black character… and it wasn’t even a Nintendo character (in fact, not only is Steve the only Black character, but he doesn’t even get his own name. His character is called Steve/Alex for whatever reason)! Yes, there are some alt-skins for characters like the Inklings or Villager that show a Black version of these characters, but the base design is 1 in 51! I’m no mathematician, but those are pretty depressing stats.

Take that earlier exercise we did trying to think of all the Black characters in Zelda and apply that to Nintendo. Granted, I can think of a few at least: Anthony Higgs was the best part of Metroid: Other M, Elma is a wicked character from Xenoblade Chronicles X, Doc from Punch-Out is pretty awesome, and of course, recently from Pokémon Sword and Shield, we had Hop. So far, we’re doing a little bit better, but a few examples in a sea of characters is still pretty lousy.

So why is this important?

To be honest, I don’t think I fully grasped why this is such a big deal until a few years ago, and as a 33-year old white dude, I’m certainly not the authority on this issue, but to me, there are two big reasons why it’s so critical.

The first is the growth of our franchise, the growth of Nintendo, and the growth of our industry. Imagine a young Black child playing a Zelda game. When that child doesn’t see anyone that looks like them, maybe they start to think ‘this series isn’t a place for kids like me’ and move on. Now imagine instead, this child sees a character with a voice that they can identify with. Maybe they stick with the series. Maybe they’re inspired to get into the video game industry. Maybe that kid ends up working at Nintendo and influencing the next Zelda game with a different perspective and experience. To anyone scoffing at this, I bet this scenario happens more than you think. I’m not suggesting you can’t identify with characters of different races, but I think we can all agree seeing characters that look like you in a world, even a fantasy world, make that world feel more inclusive. If a series is using the same types of people with the same types of experiences, then you have the same types of ideas constantly. If you never change, you never get better. Never get better, then you never get bigger.

Reason number two why Black representation is so important is maybe even more critical. I’m gonna tell you a story. Back when I was 11 or so years old, I picked up Super Smash Bros. on the N64 for the first time. I immediately found myself drawn to Samus. I had never heard of Samus or Metroid before, but the robot suit, the cool missiles, and the rest of the gadgets made Samus my favorite character. And then I found out that Samus was a girl. My 11 year old self was like ‘no way, this guy kicks butt, no way it’s a GIRL behind that helmet!‘. Not my finest moment, but hey, I was 11. I soldiered on though and kept playing as Samus, and eventually, picked up Super Metroid to see what that series was all about. Then Metroid Prime came out. And before you know it, Samus being a girl was such a non-factor to me that even a few short years later, I was embarrassed by my initial reaction. Not only was playing as this badass Space Warrior cool as hell, but it completely normalized the idea of females as bonafide video game stars in my eyes. More diversity in video games normalizes playing and identifying as different types of people to young kids – and heck, to adults too – and puts a stamp on the fact that this is a multiculturaled world we live in.

The Legend of Zelda, and Nintendo as a whole, have a problem with Black representation in their games. And to everyone getting defensive, I get it: I want this series, this company, that I love so much to be the perfect shining example that I picture them to be in my head. But the first step of fixing a problem is admitting that there is one.

Zelda has taken small steps forward. I’m hoping that we can turn those steps into leaps.

Andy Spiteri is the Editor-in-Chief of Zelda Dungeon. He’s still hoping for that Xenoblade Chronicles X port for the Switch so he can hang out with Elma for another 100 hours. Check him out on Twitter here.

Young Not Stupid: LA Teachers Are Holding Education Hostage to Get Police Defunded