Diversity in accounting: An ethical, social and practical imperative

“While diversity practices are developing, progress is fragmented … For the wider profession, there are long-term stakes in legitimacy, professional ethics, trust creation, and future recruitment.”

— Institute of Chartered Accountants of England and Wales

Serving in an attractive profession that offers great earning potential and a reliable array of career choices, accountants are historically sought after particularly during tough economies or similar times of crises. Despite such demand, the numbers within the profession remain unbalanced. Yes, women have come to represent more than 50 percent of accounting graduates over the last 20 years, and over the past 10, the percentages of accounting undergraduates and graduates who are minorities have also increased. In fact, aTrends report shows that 42 percent of accounting graduates are African-American, Hispanic, American Indian, Asian or Pacific Islander, multiethnic, or other. However, total minority hiring in the world of American CPAs has remained inexcusably low, and that must change so as to better serve both the workforce and its customers.

The U.S. Census of 2010 predicted that minorities will be the majority by 2042 — that’s about two decades away from now — and communities and clients are shifting in their demographic makeup to reflect that. Moreover, the combined purchasing power of African-Americans, Hispanics, and Asians was at $4 trillion in 2018 according to the Selig Center for Economic Growth, and demographers predict that the growth of minority populations will contribute between 44-70 percent to the total growth of U.S. purchasing power from 2000 to 2045. Still, this isn’t groundbreaking news, and diversity initiatives have been nudging accounting departments and firms for years to sit up and notice that the United States is more of a melting pot than ever before. But the need for CPA firms to bolster diversity and inclusion — and to provide not just a seat at the table, but also a voice — has never been as critical or urgent as it is today.

Because despite America being increasingly diverse, minority workers are still likelier than whites to be unemployed or declined a promotion or senior position. In 2016, Pew Research published that 40 percent of both men and women were more likely to hire men over women; in 2018, almost 90 percent of corporate executives were white and roughly 73 percent were male, and just three Fortune 500 companies in the country were headed by an African-American as CEO. Not much has changed since then, so it seems that while the world around the accounting profession is rapidly changing, the world within it is not.

With that being said, there are some visionary accounting firms that are realizing and also actively harnessing the power of diversity and inclusion within their businesses. After all, U.S. sociologist Cedric Herring has suggested that even a 1 percent increase in diversity can lead to as much as a 9 percent boost in performance. His research further establishes that racial and gender diversity promotes increased sales revenue, more customers, greater relative profits, and a greater market share. And it isn’t just Herring — other studies have proven that diverse companies are 35 percent likelier to outperform their respective national industry medians, and those with the best in-class engagement boast a seven-point increase in retention, a 10-point increase in revenue growth, and a six-point increase in gross margin. Diversity also improves internal creativity; according to one report, companies with greater diversity enjoyed a19 percent increasein innovation revenues.

All of this makes sense. Diversity — and, just as essentially, inclusion — is directly linked to business success in a win-win cycle, as diverse firms tend to attract a wider array of different candidates from the talent pool, grow their client network through more varied collaborations, and increase revenue. In accepting a broader pool of applicants and hired staff, that brings more perspectives to the table, thereby enabling companies to think outside the box and step beyond their comfort zones thanks to the new viewpoints of previously excluded or marginalized groups. Plus, a more diverse exchange of ideas often enables greater creativity, hones problem-solving, promotes competitiveness and profitability, and mitigates groupthink or stagnant status quos. Such an environment also decreases turnover, as retention increases where equal-opportunity employment and fair treatment are favored.

A more diverse firm also becomes more capable of providing a broader and more effective service range to its customers. The stereotype of the senior white male accountant isn’t a one-size-fits-all approach in accounting services — it never was, and it certainly never can be. And as the demographics of their clientele and community change, service providers must also respectively evolve in order to most effectually reflect, recognize, and serve the particular needs of their customers. When embraced thoroughly, diversity is not just about race or gender — it promotes different generations and differently abled individuals, as well, geared to support everyone within and affected by the firm’s culture.

Recognizing this, The CPA Journal has outlined some key characteristics of effective diversity plans, reflecting those of many trailblazing companies and individuals. Their diversity policies encourage the defining of diversity goals and assessments, social accountability for change, transparent and inclusive communication — especially in engaging managers to solve the problem — as well as exposure and outreach to different groups. Their diversity tactics include targeted college recruitment and mentoring programs, diversity task forces and managers, diverse self-managed teams, transparent hiring and meritocratic performance rewards, objective promotions and interviews, and carefully structured interviews and job ads. 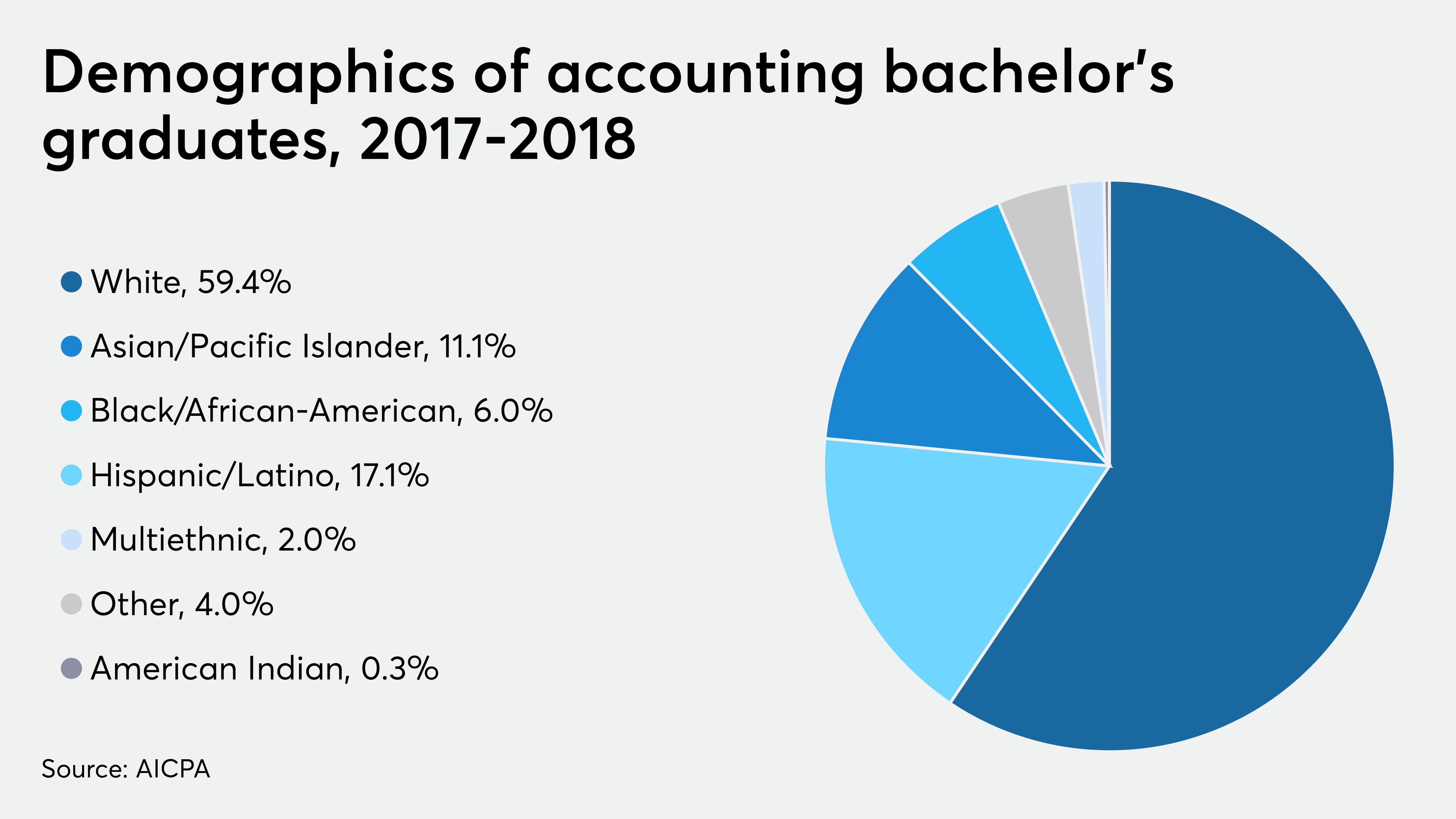 Throughout modern America’s relatively brief history, she didn’t have such an outlined plan for diversity — in terms of race, gender, ethnicity, age, cognitive style, sexual orientation, socioeconomic status, physical ability, and political or religious ideology—but even still, it was and remains this nation’s crux from the very start. As our core strength and value, it must remain so, especially as we become increasingly diverse as a society at large. Though diversity may appear to pose various challenges in business, given its demand for a thoughtful process of inclusion, it also categorically provides inarguable benefits. As such, the accounting profession should take note and pivot more fully, especially since the introduction of Generation Z to the workforce promises to vary all industries across the board — according to a Pew Research Center study in 2018, Gen Z is more favorably disposed to racial and ethnic diversity than any previous generation.

While there is already evidence of great practices being implemented and followed in various firms and departments, including the AICPA’s Accounting Scholars Leadership Workshop and Accounting Inclusion Maturity Model, statewide programs like COAP, and the Pipeline Working Group, there is still much more that must be done. In order to permeate the greater accounting profession, good collaboration, leadership, and transparency are essential and urgent for instilling effective diversity. The many positives to broadening horizons in personnel are documented — these initiatives are ethical, socially and commercially valuable, and a practical and legal imperative. We are poised for a future of bright potential ahead, and there no better time to roll up our sleeves — together.