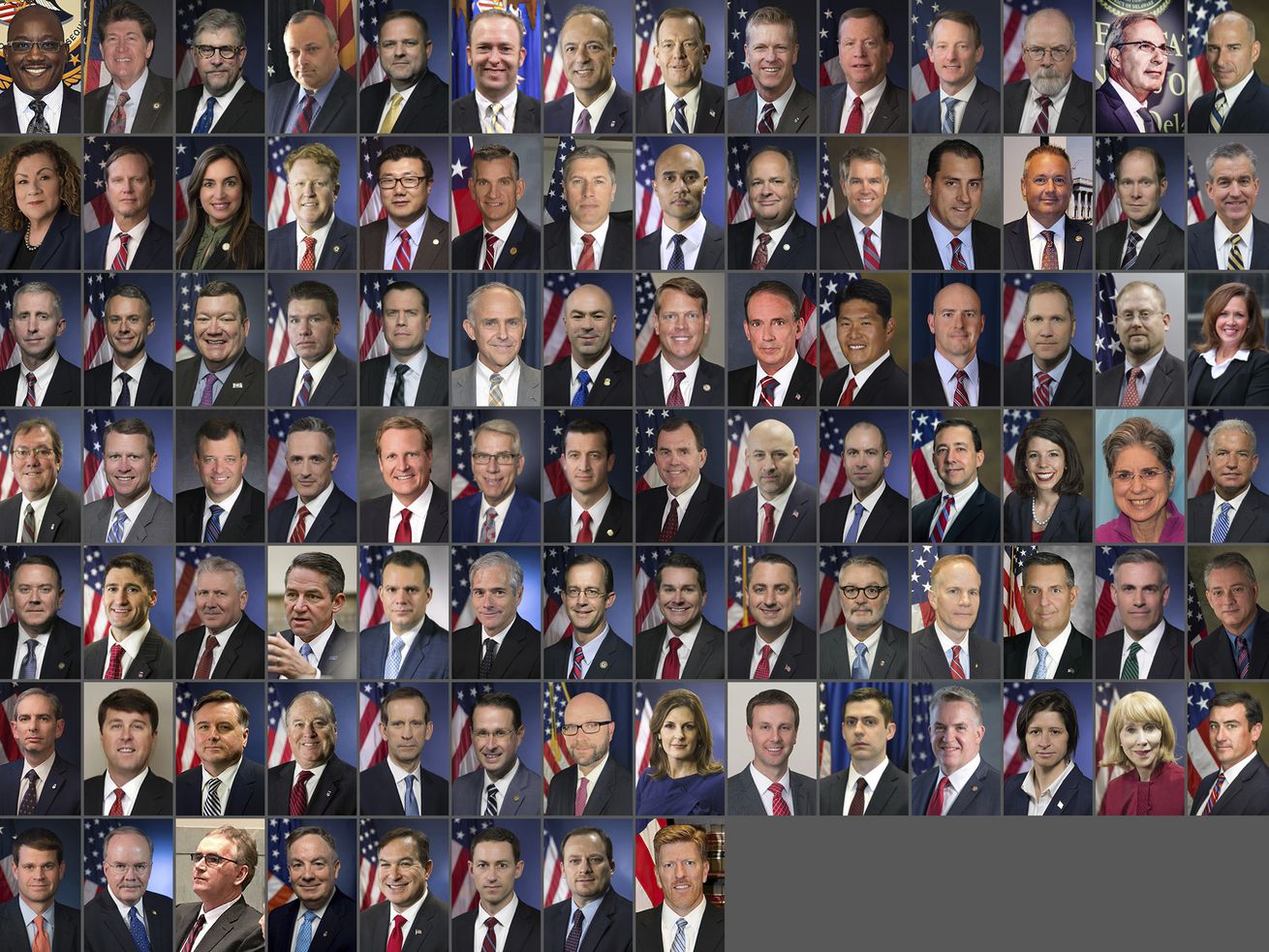 These images provided by the Department of Justice, show U.S. attorneys from across the United States. The nation’s top federal prosecutors have become less diverse under President Donald Trump than under his three predecessors. White men are overwhelmingly in charge of federal law enforcement amid a national reckoning over racial inequality and criminal justice. | Justice Department via AP

The ranks of U.S. attorneys are less diverse than under his 3 most recent predecessors, with white men overwhelmingly in charge amidst a national reckoning over racial inequality and the fairness of the criminal justice system.

The nation’s top federal prosecutors have become less diverse under President Donald Trump than under his three predecessors, leaving white men overwhelmingly in charge at a time of national demonstrations over racial inequality and the fairness of the criminal justice system.

Analyzing government data from nearly three decades, The Associated Press found that a persistent lack of diversity in the ranks of U.S. attorneys has reached a nadir in the Trump administration. Eighty-five percent of his Senate-confirmed U.S attorneys are white men, according to AP’s analysis, compared with 58% in Democratic President Barack Obama’s eight years, 73% during Republican George W. Bush’s two terms and, at most, 63% under Democrat Bill Clinton.

White men lead 79 of the 93 U.S. attorney’s offices, including the Chicago office headed by U.S. Attorney John Lausch, in a country where they make up less than a third of the population. Nine current U.S. attorneys are women, two are Black and two Hispanic.

Federal prosecutors can have a profound effect on the criminal justice system, and the leadership of those offices holds immense sway. Without a diverse group considering cases, bias can seep into charging decisions and sentencing recommendations, undermine federal leadership with state and local law enforcement and chip away at the perceived legitimacy of the justice system.

The enduring imbalance leaves U.S. attorneys looking less like the people they serve and is in stark contrast to the population of federal prisons, where a disproportionate share of those incarcerated are Black.

“When you take it in the aggregate, it becomes very evident that the department, as a whole, is simply not valuing diversity at its highest ranks of leadership and not making the most well-informed decisions when those voices are absent from the decision-making process,” said Kenneth Polite Jr., who was U.S. attorney in New Orleans during Obama’s second term. “It would be silly for anyone to suggest the department couldn’t do better.”

The gap is especially relevant in an era in which state and local law enforcement agencies repeatedly are being taken to task over decisions not to prosecute police in the killings of Black people. U.S. prosecutors can be a backstop in those situations by filing federal charges.

That the Trump administration hasn’t appointed top prosecutors who reflect the nation has deepened mistrust in communities frustrated by the Justice Department’s shift away from investigating police practices and Attorney General William Barr’s dismissal of the idea of systemic racism in law enforcement.

Asked about the diversity of U.S. attorneys, White House spokesman Judd Deere declined to answer questions. Instead, Deere said in a written statement that the Trump administration has “worked closely with U.S. senators to identify the best candidates to serve as the chief law enforcement officer in their districts back home.”

Former prosecutors say that, even among qualified and well-meaning professionals, bias can skew prosecutorial decisions when there isn’t a varied group considering the cases.

That’s something Danny Williams Sr. saw a year after he became the U.S. attorney in Oklahoma in 2012. The Tulsa police had arrested two groups, one white,the other Black, in separate armed robberies, and the cases ended up before federal prosecutors. The facts were similar, so Williams said he was surprised that the proposed charges that reached his desk were different: The Black defendants were facing more potential prison time.

Williams, who is Black, said he asked the assistant U.S. attorney who’d handled the cases what factual difference accounted for the disparity. The career prosecutor, who is white, responded that the white defendants were college students, Williams said.

“I don’t want this story to come off as I thought the guy was racist,” Williams said. “I just think that he didn’t grasp, in the charging decision, the way he treated these two different groups differently. It’s just an example of: This is why you need diversity.”

The same charges ended up being filed in both cases, according to Williams.

The U.S. attorney is the public face of a prosecuting office but hardly the sole decision-maker, serving at the top of a career bureaucracy that relies on the judgment and recommendations of lower-level officials who typically do the investigative work.

After a white South Carolina police officer gunned down a Black man named Walter Scott in 2015, the Justice Department secured a 20-year prison sentence for the officer.

Jared Fishman, the white former prosecutor who handled the case, “showed so much compassion, and he took on my brother’s case as if it was his own family,” said Anthony Scott, Walter’s older brother.

But other families have had their hopes dashed. After New York prosecutors didn’t file any criminal charges in the death of Eric Garner, the Obama administration opened a federal investigation into the Garner’s death in 2014 after a police officer put him in a chokehold. That federal investigation, not yet completed, was passed on to the Trump administration, which decided no charges would be filed.

And years before George Floyd’s death under the knee of a white Minneapolis police officer set off protests around the country, Valerie Castile turned to the federal government after the Minnesota police officer who killed her son was found not to have committed a crime. Castile called the Justice Department “our last hope when these little towns … don’t want to do what’s right.”

Former St. Anthony police Officer Jeronimo Yanez shot Philando Castile, a Black school cafeteria worker, in July 2016, within two minutes of approaching his car during a traffic stop in the Twin Cities suburb of Falcon Heights. The following summer, a state court jury found him not guilty of second-degree manslaughter.

After Castile’s death, his mother and political leaders in Minnesota, where police killed at least 60 people between 2008 and 2015, according to state data, pressed for an outside investigation into the shooting and charges of racially biased policing in the region. Local prosecutors got help in the case from the Minnesota U.S. Attorney’s Office, but there was no independent federal investigation.

But the Justice Department’s Community Oriented Policing Services Office did start a review of the St. Anthony police department. Castile testified at a community forum similar to ones the department held during its review of police practices in St. Louis County, Missouri, after the 2014 police-shooting death of Michael Brown in Ferguson.

Before the office completed its findings, though, Trump’s Justice Department, under then-Attorney General Jeff Sessions, put a stop to all such assessments, according to an announcement and the office’s former director, Ronald Davis.

A lack of diversity has long been an issue throughout the federal law enforcement and criminal justice systems. In some places, it’s grown more acute under Trump.

In 2016, James Comey, who was then the FBI director, said the bureau’s failure to recruit more minorities had become “a crisis.”

In the U.S. Drug Enforcement Administration, according to recent court filings, 8% of the agency’s more than 4,000 special agents are Black, and about 77% are white.

At the top of the Justice Department, Trump’s two attorneys general — Barr and Sessions — are white. In the past three administrations, Black people, a Latino man and the first female attorney general served as the nation’s top law officer.

“Oftentimes, you go in to court, and the judge is white, the prosecutor is white, the defense attorney is white; the only person in the courtroom who’s Black is the defendant,” said Gregory Davis, who was a U.S. attorney in Mississippi during the Obama administration.

U.S. attorneys — given broad authority to file criminal cases in their districts and draw on the investigative muscle of federal law enforcement agencies — are chosen for Senate confirmation through an interplay of the White House, the Justice Department and political leaders from each state. The path to a U.S. attorney’s office begins with state political leaders, usually senators or governors, making recommendations to the president, who generally picks a new slate of top prosecutors after taking office. The White House then sends one to three candidates to the Justice Department to be interviewed and vetted.

In response to questions, the Justice Department provided a written statement from Erin Nealy Cox, U.S. attorney in Dallas and chair of the Attorney General Advisory Committee, that didn’t address the demographic disparities among U.S. attorneys.

Cox described the current group as “the most dedicated public servants in America” and noted many have long been prosecutors.