Jason Isaacs returns this week in the new season of Netflix hit Sex Education, in which he plays the slippery rich brother of Moordale High’s disgraced headmaster. To whet your appetite, here are some things you might not know about the versatile actor who’s appeared in everything from the Harry Potter movies to cult mystery series The OA.

1. His family moved to London when he was 11, where they encountered violent anti-semitism from far-right group the National Front.

“There were constantly people beating us up or smashing windows,” Isaacs told The Independent. “If you were ever, say, on a Jewish holiday, identifiably Jewish, there was lots of violence around. But particularly when I was 16, in 1979, the National Front were really taking hold, there were leaflets at school, and Sieg Heiling and people goose-stepping down the road and coming after us.”

2. He spent his early childhood in Liverpool, but he no longer has a Liverpudlian (or “Scouse”) accent for a very good reason.

“Everyone took the piss out of my Liverpool accent in London, so I adopted a mockney [mock-cockney] accent,” Isaacs told Backstage. “Then I went to university in Bristol to do law, where everyone talked like Hugh Grant. I’d never met anyone who talked that way, but within a week I talked like that. My ability for accents was really a social weakness but a professional asset.”

Still, you can hear Isaacs talk in a still-flawless Scouse accent in this Comic Relief sketch, in which he plays a “bent copper” being interrogated by the Line of Duty gang.

3. He has been completely sober for more than two decades.

Last October, Isaacs shared a little of his journey toward sobriety on Twitter, writing: “22 years ago today I stopped taking drugs and drinking. I’d tried for decades, but was too smart, too capable and too successful to manage. Only when I admitted that I needed help did my life change. Thank you to every addict and alcoholic who’s ever lifted me up.” 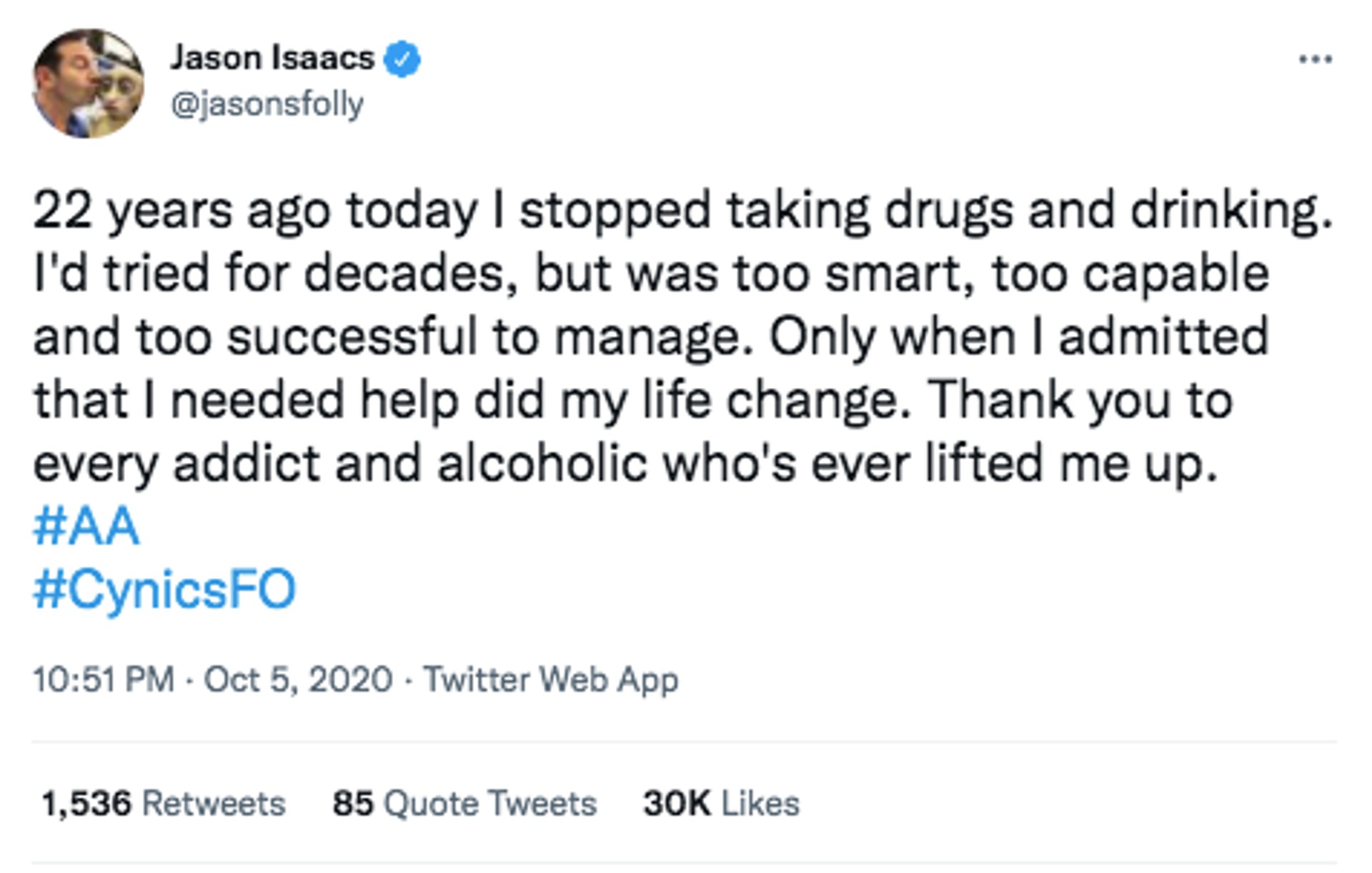 4. His acting career was never part of some grand life plan.

“At university, I studied law. People thought I was confident, but I was riddled with the insecurity of having come from a north London Jewish background,” Isaacs told The Times. “I was surrounded by [privileged] public schoolboys and girls who had the same costumes, spoke the same language and had the same accent as each other. Other people seemed to sit much more comfortably in their skins. I was relentlessly trying to find out how they had managed that. When I stumbled, drunk, into my first audition, I felt for the first time in my life that there was a room in which I fully belonged.”

5. He believes the 2003 Peter Pan movie – in which he played Captain Hook – nearly killed his career.

“When I was in Peter Pan, it was going to be gigantic. I was told it would change my life. Be careful, they said; make sure you’ve got the right people in place,” Isaacs recalled in an interview with The Guardian. “Then it came out, and it was a catastrophic flop. It killed my film career stone dead for a while. It was a great lesson. Just have a great time and do the best you can. Sometimes I wish I was more famous; you have more choices as an actor when you are. But I tend to ask: how can I be grateful for the things I’ve got, rather than for the things I haven’t got? Moaning is a waste of life.”

“If you visited the set,” he told The Independent, “you’d think, ‘Who’s that t**t over there? He can’t stop making jokes, he’s clowning around, it’s like having a five-year-old, he’s getting under people’s feet…’ but that’s actually true of lots of actors. It’s to keep ourselves free.”

7. He has turned down lucrative roles that, in his view, might have perpetuated misogyny.

“There have been jobs along the way that I could have enriched myself with, and maybe would have been good for our family financially,” Isaacs told The Independent, “but it would have been putting things out in the world that are pernicious and misogynistic and in every way doing damage to how we all behave, and how we all treat each other.”

However, he then added: “I do think it’s important that we don’t avoid showing people’s worst, most venal, sexist or xenophobic instincts through character, because those things exist everywhere, and to avoid depicting them through fiction is to deny us the chance to discuss them.”

8. He nearly turned down his role in the Harry Potter movies.

Isaacs actually read for two roles – Lucius Malfoy and the wizard Gilderoy Lockhart, which ultimately went to Kenneth Branagh – but director Chris Columbus asked him to play Malfoy. “I said thanks very much, I’ll think about it,” Isaacs told the Liverpool Echo. “The same day I’d been offered Captain Hook in Peter Pan, and so I thought I probably shouldn’t do both, and it was my strongest temptation to say thank you very much but no. And I was advised, begged, bullied into thinking again by all the children in the world that I’ve ever come into contact with – my godchildren, friends’ children, nephews, and nieces. They all phoned up and bullied me into saying yes, and I’m so glad they did. Never have I been more wrong in my first instincts.”

Though he’s never appeared on a soundtrack album, Isaacs has shown off his vocal chops in several TV shows and movies. Here he is belting out the Percy Sledge classic “When a Man Loves a Woman” in cult 2001 film The Last Minute, in which his character is called, appropriately enough, Dave “Percy” Sledge.

10. Two people aren’t quite so excited about his role in Sex Education: his teenage daughters, whom he has raised with wife Emma Hewitt.

“Having a father who has any kind of profile at all is excruciating to them,” Isaacs told the New York Post. “They don’t want to be known as ‘Lucius Malfoy’s daughter’ or whatever. So, the notion that I’m in Sex Education is mortifying, because it’s one of their favorite shows. When I told them I wasn’t getting my clothes off or having sex with anyone, they were so relieved.”

In fairness, this is a very relatable attitude from Isaacs’ daughters!

Have we missed out something interesting about Jason Isaacs?